Excessive humidity and other stress factors are causing Botrytis blight in Michigan potatoes this season. Learn the epidemiology of this disease, as well as control methods and fungicide options.

Botrytis blight is causing problems in potatoes throughout Michigan this season. The fungus Botrytis cinerea causes Botrytis blight, also known as tan spot or gray mold. The pathogen has an extremely wide host range with well over 200 reported hosts including snap beans, other edible beans and soybeans, lettuce, tomatoes, various soft fruits, peas, peppers and many herbaceous perennials, and is found wherever potatoes are grown. The disease is usually the result of excessive humidity and other stress factors that may include presence of potato early die, excessive rates of evapotranspiration and nitrogen deficiency.

In recent years, Botrytis blight has posed a large threat to the potato crop even in drier years like 2012, as one of the major drivers of gray mold is excessive irrigation with high fertilizer inputs, which leads to a dense canopy that remains wet for a longer period of time. The fungus overwinters on plant debris. Tuber infection can occur if the inoculum levels are high and the storage facility is very humid. Standard fungicide protection programs offer some suppression, but when conditions are wet the disease can develop quickly and enhance defoliation. Botrytis blight can also cause postharvest symptoms on potato tubers that are similar to Fusarium dry rot. The pathogen can overwinter as sclerotia, which germinate in the spring and early summer to produce clusters of “grape-like” conidia that are readily spread in air currents.

Leaflet lesions are readily seen on senescent tissue or tissue that has been damaged by mechanical, meteorological or chemical damage such as fertilizer application (Photos 1 and 2). Petiole lesions develop from leaflet infection and colonization and often constrict the conducting function of the compound leaf, limiting transport of photosynthates to the tubers (Photo 2). 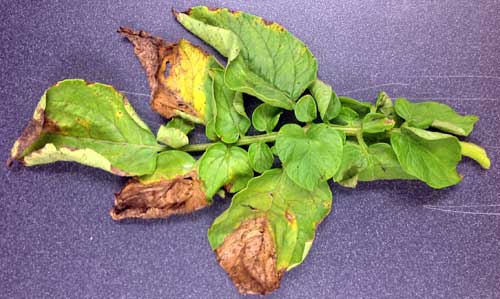 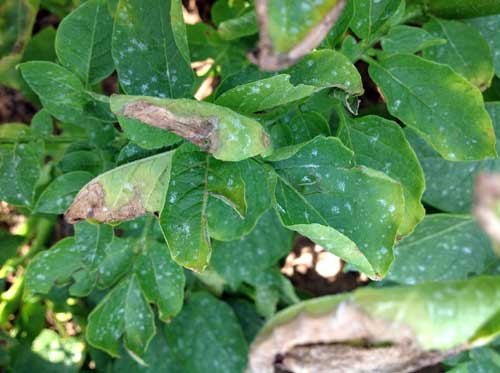 As the disease spreads along the petiole to the main stem, a lesion can form at that junction. Stem lesions on potatoes can occur all the way up the stem (Photos 3 and 4). Stem lesions are common during senescence and may become infected at leaf scar sites or any form of stem damage, in particular from corn stem borers (Photo 4). Stem lesions may partially girdle the stem, but under hot conditions (greater than 85 degrees Fahrenheit) the whole stem can break down, especially in the presence of secondary bacteria. The disease initially appears as a tan lesion (Photo 1) at the leaf margin and eventually the entire leaflet, the compound leaf, becomes necrotic. The gray appearance of the lesion is a result of the gray/black conidia on long-stalked conidiophores on the leaf surface. 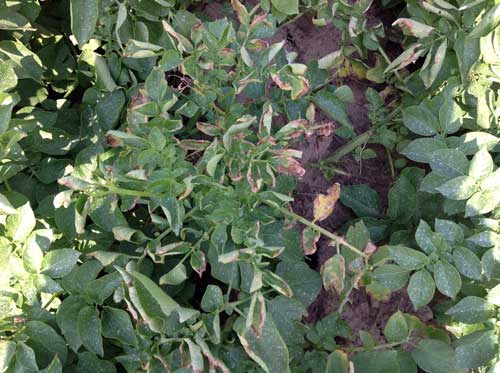 Photo 3. Stem lesion on potato, occurring all the way up the stem. 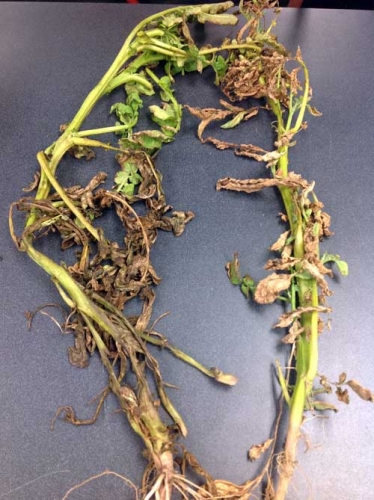 The fungus overwinters as sclerotia or mycelium in plant debris. On potatoes, B. cinerea can be seed-borne and develop from mycelium on the mother tuber. It is likely in Michigan with such a wide crop range for other crops to serve as sources of the pathogen. Conidia are readily airborne and may also be carried on the surface of splashing rain or irrigation water. Relative humidity around 90 percent is necessary for spore production. Spores landing on potato plants germinate and infect in the presence of free water from dew, rain, mists or irrigation.

The optimum temperature for infection is between 65 and 75 degrees Fahrenheit and can occur within five hours. However, temperatures, above 82 degrees Fahrenheit suppress growth and spore production, although secondary bacterial infections can enhance the development of disease complexes. Infected flowers can spread infection to leaves and stems and also direct contact with moist, infested soil or plant debris can promote infection as in the case of white mold (Sclerotinia sclerotiorum).

Many potato varieties are susceptible to B. cinerea. Atlantic, Snowden and some other propriety late maturing varieties appear particularly susceptible but as B. cinerea can act as a saprophyte, it is also difficult to assess which varieties are truly more or less susceptible to the disease. When nutrient deficiency and potato early die or other root-restricting diseases stress plants, the disease can spread rapidly. Practices that limit leaf wetness duration such as irrigation during evening hours and optimal nutritional practices can delay the onset of gray mold.

Most fungicides registered for use on potatoes are protective in their action and although they suppress and delay onset if infection, do not control established disease. The most effective fungicides in recent MSU trials have been Scala and Luna Tranquility. Tanos may also suppress secondary infections by other pathogens and delay the rapid spreads of Botrytis blight through the crop. Copper products such as Kocide and Cueva can help dry stems by controlling secondary bacterial spread. The recommendations from MSU Bulletin E312, 2012 Insect, Disease and Nematode Control for Commercial Vegetables, are shown in Table 1.

Table 1. Products recommended for control of Botrytis blight in potatoes.

How hot? How dry? Enviro-weather tools help answer these questions