Many growers saw broad mites for the first time in 2010. Whether or not they make an appearance in 2011 probably depends on the weather.

Broad mites are not a new pest in Michigan, but 2010 was the first year many growers saw plant symptoms. Pests adapted to warmer climates can be present in Michigan but it takes the right conditions to allow them to become a problem. Such was the case with broad mites in 2010. The warmer than usual summer temperatures, especially at night, allowed broad mite populations to increase to the point that they became a visible problem.

Low populations often go undetected since adults are 0.2mm long – smaller than a period (.) and less than half the size of a two-spotted spider mite. In peppers, the first thing noticed in high populations are twisted, curled leaves and deformed fruit (Figure 1). Symptoms appear similar to virus infection or nutrient deficiencies. Broad mites are not easily seen so most growers think they are dealing with a virus problem. 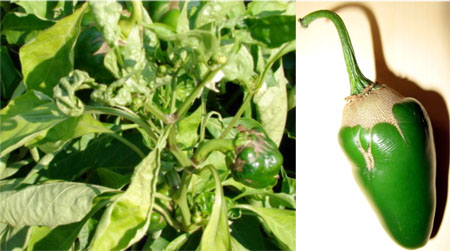 For such a small pest, broad mites are extremely active. This may be because they only have one to two weeks to live. They move from plant to plant on wind or hitch rides on more mobile, winged insects. Males grab onto and carry immature females on their backs and mate as soon as females emerge as adults. Non-mated females still give birth, but only to males.Broad mites have a wide range of vegetable and ornamental crop hosts and can be controlled similar to other mites using organic or conventional approaches. For more information refer to the fact sheet, Broad Mites: The Microscopic Menace, developed by Howard Russell and Jackie Smith from  MSU Diagnostic Services.A list of currently registered miticides for different vegetable crops can also be found in Bulletin E-312 at http://veginfo.msu.edu/E312/.Will broad mites be back in 2011? That depends. They could in protected environments like greenhouses and high tunnels where temperatures are naturally higher, but what about in the field? It depends on our weather. If we have warm temperatures expect them to show up so don’t automatically think your plants have a virus or nutrient problem. Get a hand lens and take a closer look.For more information on commercial vegetable production contact Dr. Ron Goldy, Michigan State University Extension Vegetable Educator at (269)944-1477 ext 207 or goldy@anr.msu.edu.

What to expect when filing a pesticide complaint with MDARD