A search for information about past uses for two common lawn weeds yields some interesting results.

I recently visited Peru as part of a study tour, and one thing that really struck me was how knowledgeable the people in rural areas were about the plants growing on their lands. We learned about many plants used to produce natural dyes for the beautiful textiles produced in the Andean villages. During a visit to the Tambopata Reserve in the Amazon, our guide shared a wealth of information about numerous trees, shrubs and herbs that have medicinal properties, many of which have been utilized to develop pharmaceuticals elsewhere in the world. It reminded me once I returned home to think more about some of the forgotten uses of plants in my own back yard. Two of my back yard inhabitants are broadleaf and buckhorn plantain. Broadleaf plantain (Plantago major) has broadly lance to egg-shaped leaves with five to seven parallel veins. The leaves have a short stalk and are hairless or have only a few short hairs. It flowers from spring until late summer. The flowers are green and inconspicuous, densely clustered on spikes. Buckhorn plantain (Plantago lanceolata) has much narrower leaves with similar parallel veins and denser hairs. The flowers are densely crowded on the tips of wiry stems. Plantains are used as food by caterpillars of the buckeye butterfly (Junonia coenia), as well as many European butterflies and moths. These species of plantain are of Eurasian descent, but have become naturalized in most of the United States and Australia. They thrive in gardens, urban sites, in lawns, crop fields and other areas where the soil has been disturbed. 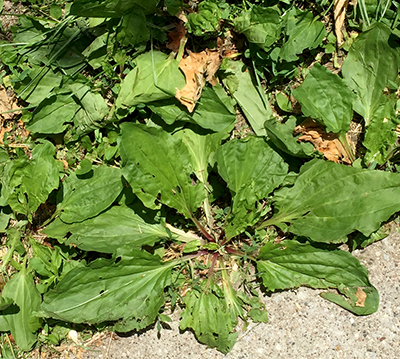 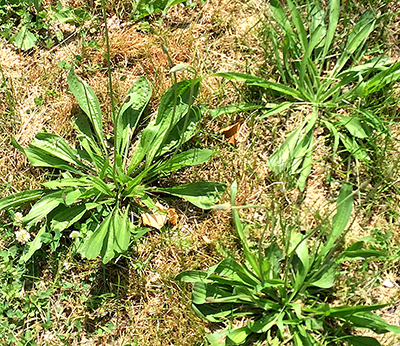 You may wonder how many of our common weeds got here. The short answer is that they had some help. Many were used for medicinal or culinary purposes in their native region. When immigrants came to the US, they brought along familiar and valued plants. This is the case for broadleaf plantain and buckhorn plantain. Broadleaf plantain is reported to have been brought to North America by the Puritan colonists, and earned the name of “white man’s foot print” due to how well it established itself in disturbed soils surrounding European settlements. In the past, parts of it were utilized as salad greens, as an herbal tea, as a compress for minor cuts and bruises and to treat upper respiratory infections. Buckhorn plantain had similar uses; notably, a tea made from the leaves was used as a cough syrup in Austria. Plantains are high in calcium and vitamins A, C and K. Today, their more useful characteristics are largely forgotten, in our quest for weed-free lawns and gardens. Several historical ethnobotany references cite similar uses of related native plantain species by Native Americans. A species native to India, Plantago ovata is the source of psyllium seeds and is used as a source of dietary fiber and a natural laxative.

The Song of a Snowy Tree Cricket