Build your own seeded coir logs for use in shoreline restoration? Part 1

Updated from an original article written by Jane Herbert and James Bess.

This novel approach to restoring shorelines with native plant seeds secured in homemade coir logs is being tested on the Keweenaw Peninsula.

In 2009, Jim Bess began a coastal wetland restoration project on Lake Superior in Michigan’s Keweenaw Peninsula. It was part of his PhD research in the School of Forest Resources and Environmental Science at Michigan Technological University. Whereas most freshwater coastal restoration projects to date had used nursery stock or cuttings to establish vegetative cover quickly, Jim wondered if seeds could be used as an economical alternative.

Seeds from 47 wetland plant species, native to the Keweenaw Peninsula, were hand-collected and weighed into individual seed mixes for each of his two wet meadow restoration projects. One project is located on a relatively protected bay known as Sand Point. The other is located at the Keweenaw Land Trust’s Marsin Center on the Portage Waterway – a natural waterway that cuts through the peninsula. Both projects were of similar design. For experimental purposes, milled peat moss was added to half of each project to compare effects on seed retention, germination and seedling establishment.

To wave-break the wet meadow seedings Bess needed biodegradable linear shoreline protection such as coir (coconut husk) fiber logs. But he also wanted to plant – and establish from seed – native emergent aquatic plants at the water’s edge. Planting seeds in a pre-made coir log did not seem like a viable idea – they would probably get washed away. So to hold the seeds in place while they germinated and took root Jim developed a technique for constructing his own seeded coir logs. 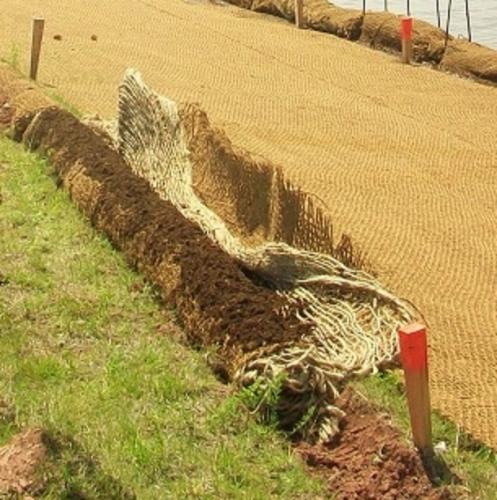 Log after rolling and prior to placement of seeds. Note finished logs placed as wave break along waterline. Photo Credit: Jim Bess

First, he laid flat a layer of coir fiber mat (70 grade). Then he placed a layer of natural jute matting over it. The two were then rolled up together to form a “log” with the seed being added to the last few feet, so they were located on the outer portion of the log when it was completed. When placed at the water’s edge, Bess was careful to keep the seeded side of the log up. This way the seed would get wet but not continually inundated. Ten-by-ten foot square wet meadow plots were then planted immediately landward of the emergent logs and covered with a layer of the jute matting and the 70-grade coir mat to hold seeds in place and minimize erosion. He also built logs seeded to wetland shrub species and placed these upland on the landward side of his wet meadow plots. Part 2 of this Michigan State University Extension article will detail Bess’s results; how the logs performed and the effects of the milled peat moss on seedings in both the logs and the wet meadow restorations.

Is your water garden having a RIPPLE effect on Michigan's waterways?