Can consumers change their minds about GMOs once they have been on a modern farm?

The statistical implications of visiting a modern, working farm.

GMOs are a touch point in many conversations about food today. While GMOs or genetically engineered (GE) plants have become a controversial topic, they are not well understood by consumers. In addition, there are numerous organizations and individuals, some selling books and videos, who make claims about foods derived by genetic engineered techniques. So what happens if consumers are given a chance to visit a working farm and have an opportunity to review some information about GE crops, commonly called GMOs, which farmers have been using for a number of years to produce the food we eat? From our exit and follow-up online surveys we found that consumers who attended Breakfast on the Farm events wanted to know what is in their food, i.e., do they contain GMOs, not so much that they think GMOs are harmful!

Breakfast on the Farm (BOTF) events have been occurring in Michigan since 2009 with over 85,000 people attending 37 farms to have breakfast and a self-guided tour through dairy, crop and beef facilities. Volunteers are on hand at many educational stations to try to answer participants’ questions. To learn what the public thinks, we ask them to compete exit surveys upon leaving and some provide email addresses so they can complete an online follow-up survey three to five months later. Online follow-up survey data presented here is from 108 respondents representing 5,509 participants who attended two Breakfast on the Farm events in 2016.

Those indicating foods containing GMOs should be labeled (N=64) were asked to check all the reasons why they felt foods with GMO ingredients should be labeled. A number of respondents had multiple reasons, so the percentages in Figure 2 will not add to 100 percent. 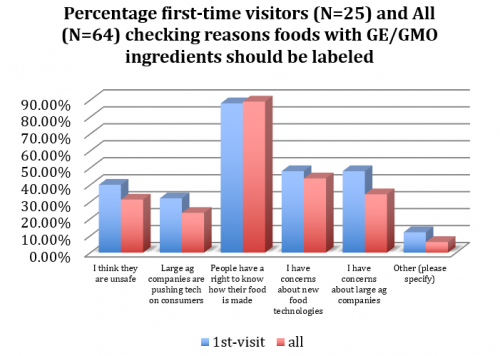 Maybe surprisingly, less than half of those who think food should be labeled because people have a right to know actually believe that GE/GMO foods are unsafe. Lusk reported that 83 percent of a national survey indicated that they felt there should be mandatory labeling of foods containing GMOs. This survey also revealed that 80 percent felt that foods containing DNA should have mandatory labeling that they contain DNA. This shows how uninformed consumers are about biology, since all living things contain DNA. Perhaps this leads many to be concerned about genetically modified foods as a recent MSU Food Literacy survey indicted using a national population survey that 37 percent believed that genetically modified foods have genes and non-genetically modified foods do not. And a greater percent, 43 percent, of those who are less than 30, believed this to be true.

Supporting this is data from the 2016 online survey showing a decrease in the level of concern about the safety of GE/GMOs on a five-point scale from very low concern to very high concern. However, this decrease was less dramatic than the increase in trust in farmers regarding their use of pesticides. For first-timers, 22 percent and 26 percent were concerned before and after the tour respectively, while those who were very concerned dropped from 44 percent to 32 percent after making the total who were concerned or very concerned 66 percent before and 58 percent after their tour. This was a drop of only eight percent in those with concern. While 22 percent had little concern or were not concerned at all before, this increased by seven percent to 29 percent after indicating some decrease in their level of concern about GMOs. For all 106 respondents, they had a much lower level of concern before with 44 percent being concerned or very concern before, dropping to 37 percent after and the 35 percent who had little or no concern before increased by six percent to 43 percent after.

Who Came to BOTF

BOTF attempts to attract individuals who have not been on a farm in a while. For this sample from the two events using online surveys in 2016, 53 percent had been on a working dairy or crop farm less than 3 times in the past 20 years. This population was also composed of 79 percent who were not working or involved in agriculture related jobs. The impact measured in this survey represent a large portion of people who are not directly involved in agriculture, particularly the first-time visitors. Therefore, the results suggest that some consumers unfamiliar with how their food is produced do change their minds GE/GMOs and pesticides if given an opportunity to visit a working modern dairy or crop farm and read or visit with someone about genetic engineering/GMO technologies and farming practices.

Food conversations today may include discussions about GMO's. Although consumers have very little knowledge about what a GMO is, some (about 31 to 40 percent in BOTF surveys) have strong concerns that they may be harmful or unhealthy. While most individuals believe that foods should be labeled if they contain ingredients from genetically engineered or GMO plants, the main reason given (for 88-89 percent) in Breakfast on the Farm surveys is that people have a right to know how their food is made. When consumers visit dairy and crops farms during BOTF events, the have an opportunity to talk to farmers, veterinarians and other professionals and volunteers and gain some information regarding GMO‘s and how and why they are used. This influences their level of trust in the use of GMOs and pesticides. The increase in trust in the use of pesticides was greater than the decrease in concern about GMOs and in particular, for those making their first visit past 20 years. One advantage to BOTF tours is that consumers get to see facilities first hand, connect with people producing their food and read and talk about various food production topics, helping them better understand modern food production. Getting the concepts of GE/GMO technology across to consumers is much more difficult than showing them how animals are housed and cared for as the latter is very visible during these events. Developing ways to increase the engagement of participants during these events, on such topics as GE/GMOs, is likely to increase the impact on their impressions and trust in today’s food production systems.