Air temperatures were relatively cool for the end of June and first few days of July with highs in the upper 60s to low 80s in Entrican, Michigan. Low temperatures ranged from 49.2 degrees Fahrenheit July 2 to 59.3 F for the week. Average relative humidity levels have been ranging from low 70 percent to low 80 percent.

Rainfall totals for the week were variable with most areas receiving some rainfall, as little as 0.3 inches and as much as 2 inches. Soil conditions are close to field capacity in many areas as water use has been relatively low for this time of year.

Potatoes are variable in growth stage depending on planting date. Early planted potatoes are covering the rows and filling tubers while later plantings are being cultivated and hilled. Fungicide applications are being made by most growers on a seven-day schedule. Volunteer potatoes continue to be a concern as are potatoes emerging from rock piles.

Tomatoes are setting fruit. Growers of all field sizes should be applying preventative fungicides to tomatoes. Even though we have not found late blight in Michigan as of July 8, weather conditions are favorable and risk is elevated this season due to the prevalence of the disease last season and the number of volunteer potatoes in the area.

Sweet corn planting is complete with early plantings silking. Growth rate and color has improved dramatically from earlier in the season with warmer temperatures. Monitoring the crop’s nitrogen status is important given weather conditions of the previous few weeks and the potential to have lost nitrogen. If tissue sampling, it is important to sample the ear leaf before pollination begins.

Table beets, particularly those that are still a few weeks from harvest, should be monitored for Cercospora leaf spot. Cercospora leaf spot has been observed in sugarbeets in the Saginaw-Bay area in the past week and weather conditions have been favorable for disease development. Note that bacterial leaf spots are quite common and can look somewhat similar on red beet leaves when examined in the field. If uncertain, samples can be sent to MSU Diagnostic Services, or your local MSU Extension vegetable educator may be able to assist you.

Potato leafhoppers are present in many susceptible crops, but generally in low numbers. Japanese beetle adults are emerging. 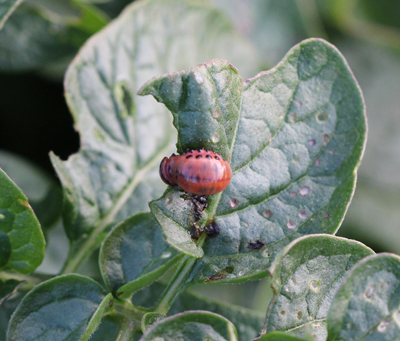