Warm temperatures have improved vegetable growth in the central region.

High temperatures ranged from the mid-70s to the upper 80s this week at Entrican, Mich.; lows ranged from the mid-40s to mid-60s. Average relative humidity levels have been increasing with several days over 70 percent. Passing thundershowers produced less than 0.5 inches of rain in some parts of the central region this week, while much of the area remained dry.

Snap bean planting continues and dry edible bean planting is finishing up. Emergence has been rapid on newly planted fields. Michigan State University Extension advises growers to scout for potato leafhopper adults and nymphs if seed was not treated with an adequate insecticide. 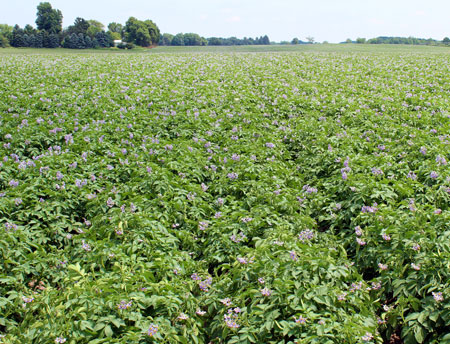 No late blight has been observed, but the possibility of this disease appearing is a concern. Eight disease severity values have been accumulated in the last three days at Entrican, Mich. – four yesterday (June 25) and two on each of the days before for a total of 41 since May15. Protectant applications of fungicides are recommended. For specific recommendations, visit the Late Blight Risk Monitoring website.

Master sanitation schedules: A tool to effective cleaning and sanitizing