More rain delays for many vegetable growers in central Michigan.

More rain delays last week as many areas in central Michigan received 2.5 to 3 inches of rainfall on Tuesday, May 28, and Wednesday, May 29, with additional light rain showers the following Thursday and Friday. Air temperatures have been quite variable for this time of year; we reached a high of 84.7 degrees Fahrenheit at Entrican on May 30, but only 63.8 F on June 2. Low air temperature dipped into the 30s this week on the morning of June 3, but no frost was observed or reported. Development of many crops has been slow this spring.

Soil conditions remain generally wet, tile lines were easily observed in Gratiot County earlier this week. Well-drained, sandy soils were dry enough to work in the Montcalm, Mich., area on Tuesday, June 4, but many fields have low or poorly drained areas that remain very wet with standing water not uncommon. 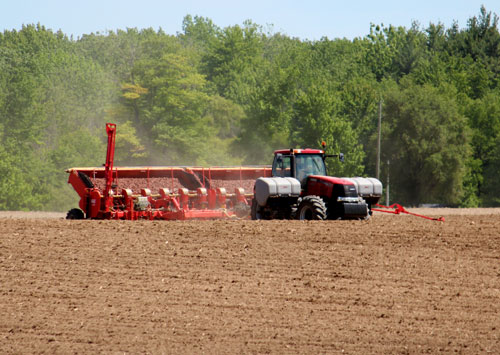 Sweet corn planting continues with early plantings at V4. Many of these early plantings are yellow and appear nutrient deficient, however in most cases the dominate, cool and cloudy weather conditions are the primary reason for the chlorotic appearance.

No significant progress in pickle planting or edible bean planting has occurred.

Traps for true armyworm are also catching very low numbers; however, it is important to note that small outbreaks are still possible. While scouting vulnerable crops such as sweet corn, Michigan State University Extension advises growers to watch for feeding injury and larvae, especially if these crops were established into a grass cover crop such as rye.

In-person, on-farm learning for beginning farmers amidst the COVID-19 pandemic