Magnolia scale is having a good year

Look for magnolia scale now and plan to treat heavily infested trees with a systemic insecticide in August, or with a crawler spray in late September.

Magnolia scale (Neolecanium cornuparvum, Thro) is the largest scale found in the United States. Its primary host is magnolia. Star magnolia, saucer magnolia, cucumber tree and lily magnolia are among the species most commonly infested. Like other scale insects, it is good at disguising itself to escape detection, but its large size – up to 0.5 inches – makes it more conspicuous. Scale insects often resemble small galls, plant parts like buds or lenticels (pores for gas exchange), or seeds. Adult male scales are small, active and superficially resemble tiny flies. Adult female soft scales are comparatively large, sedentary, hemispherical or lens-shaped and may be covered with wax.

Magnolia scale has sucking mouthparts, which it uses to remove large quantities of sap from twigs and young branches. Heavily infested branches can be completely covered by scale and may be weakened or killed by it. Magnolia scale also produces a sticky, sweet substance called honeydew, which attracts ants, yellow jackets and other insects that feed on it. The honeydew is largely concentrated plant sap excreted by the insect. A fungus called sooty mold can grow on the honeydew, resulting in blackened leaves and branches, greatly reducing the ornamental value of the tree. The appearance of black sooty mold is often what alerts people to the presence of scale insects on their landscape plants.

Both female and male scales undergo significant changes in their appearance as they mature. Tiny, dark nymphs overwinter on one- to two-year-old twigs. As temperatures warm in the spring, the scales resume feeding and differentiate into males and females. The males remain small, about 0.125 inches, turn waxy white, and soon after emerge as tiny, pink to yellow gnat-like insects. The females stay on the branches and grow, turning brownish-purple and producing lots of honeydew. In mid-summer the female magnolia scale is covered with powdery, white wax, which rubs off as the female matures. In early August, the females look white because of a thin coating of white wax over the scale. By mid- to late August, females begin to turn a yellow-tan color and lose their coating of wax. They give birth to tiny, dark nymphs known as crawlers, which overwinter on one- to two-year old twigs and begin the cycle again. 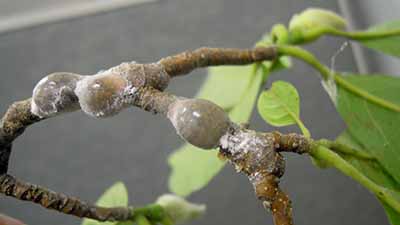 According to Michigan State University Extension, small infestations can be removed any time of year by pruning out infested branches. There are two strategies for treating heavily infested trees. The first option is to use imidacloprid or dinoterfuran as a basal soil drench in August. Check the product label to make sure it has one of those two active ingredients. Homeowners can purchase imidacloprid as “Tree and Shrub Insect Control” or in several other products. Follow the label directions for mixing the product in a bucket of water and pouring it around the base of your tree. It is not known how much risk would be posed to pollinators by a fall soil drench of these products, but it would be less than an application in spring shortly before bloom. The second option, which would pose no real risk to pollinators, is to spray your tree when magnolia scale is in the crawler stage. Watch for the small, reddish crawlers to emerge between the middle of September and early October. As of this writing, August 13, 2015, crawlers have already started to emerge.

Horticultural oils, often called summer oils, applied after the crawlers have emerged in late August can be very effective in reducing the scale population. Be sure to obtain good coverage. Oils can also be applied in fall before freezing weather and again in early spring before the flower buds swell to kill the overwintering nymphs located on the stems. Do not exceed the label rate, which is usually a 2 percent concentration of oil in the spray that is applied. For the professional landscaper or arborist, you can also spray the crawlers with Pyriproxyfen (Distance), an insect growth regulator that is very safe to use. Before using any pesticide, be sure to read, understand and follow the label directions.