Chestnuts: Growing a food crop and an industry in Michigan 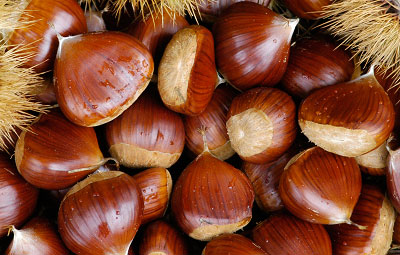 The American chestnut, Castanea dentate, was once considered the redwood of the east. Chestnut trees grew to be very large with trunks often greater than 5 feet in diameter and reaching heights of 100 feet. In states like Pennsylvania, it made up 25 percent of the forest. The American chestnut was a major source of lumber and an important source of food for many animals. It was also a favorite of many people that loved to eat it roasted. The chestnut rivaled the white oak as an important food source for animals with one major difference: it could produce a crop of nuts after eight years, while the oak often took over 20 years. A single chestnut tree could produce 10 or more bushels of nuts.

This important tree for food and lumber was decimated by a fungal blight that was introduced into the New York area on imported chestnut trees around 1904. The chestnut blight fungus, Cryphonectria parasitica, quickly spread across the eastern half of the United States, killing more than three billion trees by the 1930s.

The loss of the American chestnut in the United States may have eliminated a much loved food crop, but it spurred on the entrepreneurial spirit of a number of Michigan nut growers. Chinese chestnut trees, tolerant to the chestnut blight, were planted in Michigan before the 1980s and numbers grew as chestnut organizations began to encourage more people to become involved.

The Midwest Nut Producers Council started trials of chestnut cultivars at Michigan State University Extension’s Southwest Michigan Research and Extension Center in Benton Harbor, Mich. By 1996, data from these trial plots suggested that ‘Colossal,’ a European x Japanese hybrid provided large nuts and large yields. Though the European chestnut is susceptible to chestnut blight,  it also produces four to five times more nuts than the Chinese chestnuts. Growers in Michigan have chosen to grow both the resistant Chinese chestnuts along with the very productive, blight-susceptible European chestnuts. 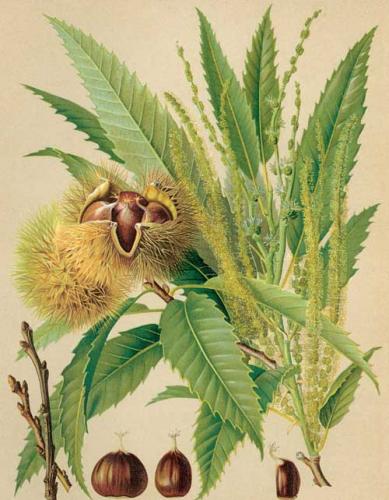 As of February 2013, Michigan chestnut growers are number one in the number of chestnut farms, total chestnut acreage and acreage per chestnut grower. Michigan growers harvested their largest crop at about 100,000 pounds in 2011. A great benefit to growers in Michigan is the commercial peeling line housed at the MSU Rogers Reserve Endowed Research Farm near Jackson, Mich. It is the only one in the western hemisphere.

Help is available to growers through research and education sponsored by the Midwest Nut Producers Council and the chestnut research team at MSU. They provide growers with current research that helps them make choices in best planting stock for their site, site selection for chestnut production, cultural practices to maintain healthy plants, harvesting and storage, product development and enhancing markets.

For more information on growing chestnuts in Michigan, visit the MSU Chestnut website at www.chestnuts.msu.edu.