Often in June, the first symptoms of damage from earlier pest activity start becoming noticeable in Christmas tree plantations. Here are the most common ones Michigan State University Extension experts are finding.

Wilted leaders due to damage from white pine weevils

Growers may start seeing damage from white pine weevils now. Tops of spruce, Scots and white pine will start showing the characteristic drooping or curled terminals. If you look closer, you will see small, white larvae under the bark or in the wood of the damaged terminal. This is a good time to prune out and destroy infested leaders. Make sure to remove them from the field. Then, select a new lateral shoot on the upper whorl to become the new leader. Trim the rest of the shoots back to one-half of their original length.

Early summer we will begin to see bronzing of older foliage due to earlier mite feeding. Remember, if you use a piece of white paper that you hold under a branch and tap to check for mite activity, there are many other tiny insects that will fall out. Make sure to examine trees or the paper with a hand lens to confirm that you have spider mites or eggs present before deciding to apply a pesticide. 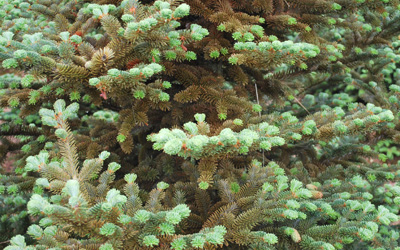 European pine sawflies (Neodiprion sertifer) feed on older foliage of Scots and Austrian pine. This feeding can cause tufts of dead needles or missing foliage on older growth. 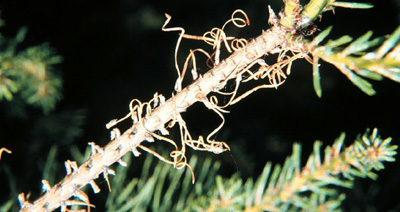 Galls on new growth of spruce

Feeding by adelgid nymphs cause galls to form on new growth of spruce trees. Green to purple, pineapple-shaped galls at the base of new growth of white, Norway or black hills spruce are caused by Easter spruce gall adelgid (Adelges abietis). Green, cone-like galls on the end of the current-year growth of Colorado blue spruce are caused by Cooley spruce gall adelgid (Adelges cooleyi). If you only find a few galls, they can be clipped off and destroyed before they turn brown and open in August. If galls are numerous, you can apply an insecticide either this fall or early next spring to control overwintering nymphs. 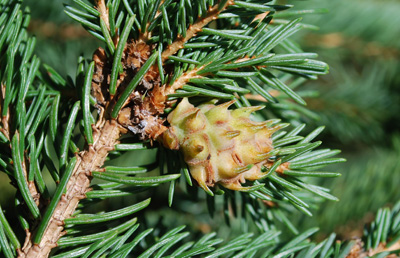 Each year we find new growth on terminal shoots dead and hanging on the leader. At first glance, it looks like some insect may have girdled the shoot. However, these broken treetops are caused by birds perching on newly developed shoots. Breakage typically occurs this time of year when new tops are elongating, before they are stiff enough to support a bird perching. We seem to see this damage more on blue spruce, but have seen it on Fraser fir, Norway spruce and other conifers. Taller trees seem to be more affected as birds look for higher vantage points. 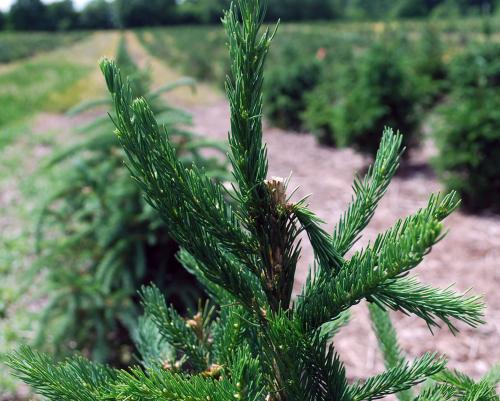