Clean machinery before taking it home

Several soil borne disease and nematode pests attack, or have the potential to attack, many of the common crops grown in Michigan. Many of these soil borne pests are present in some geographic areas, but not others.

Soybean sudden death syndrome (SDS) was confirmed in six Michigan counties in 2009 and was suspected in seven more in 2010. Potato cyst nematodes are not known to exist in Michigan but are present in Idaho and New York as well as other parts of the world. Disease and nematode presence can even vary from one farm to the next. Phytophthora blight of pickling cucumber is present in most of Michigan but there are many individual farms and fields that are relatively uninfested.

While there are many ways these pests can potentially travel, there is one that can be reduced or eliminated. That way is hitching a ride in soil that is on equipment. Any tool that contacts the soil, including tillage tools, planters, and some harvesting equipment, presents an opportunity for pests and pathogens to be introduced to a new area.

Here are some examples. Photo 1 shows a common tillage tool on many farms, a field cultivator. This tool was on an auction at an equipment dealer lot over this past winter. Photo 2 shows one of several shanks of this field cultivator with a significant amount of the previous owner’s soil still clinging to it. Photo 3 is a disk harrow at another equipment auction. Photo 4 shows a large amount of soil clinging to the disks on the folded wing. Photo 5 shows a smaller but still significant amount of soil around the disk axel bearing and standard. 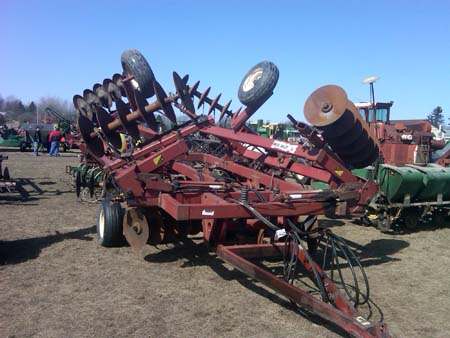 Photos 4 and 5. Left, a large amount of soil clinging to the disk on the folded wing. Right, soil around the disk axel bearing and standard.

On many other machines at these and other equipment auctions this winter, it was not difficult to obtain between a handful and a bucket full of soil – certainly enough to introduce a pest to a new field  if present. While the presence of soil does not definitively indicate pathogen or pest presence, it certainly does present a potential risk to the new owner of the tool.

Whether you have purchased used equipment, or you are bringing previously used tools onto your farm through rental or other arrangements, thorough cleaning by pressure washing the machine before it arrives at your fields can help postpone or prevent the establishment of many diseases and other pests to your farm.

Water management in a plasticulture system: What we learned from the okra incident