Here are the results from MSU’s research to determine which cultivars consumers prefer.

How do we perceive flavors? Flavor is complex in that it is more than what our taste buds tell us – that a food is sweet, salty, sour, bitter or savory. Scientists are discovering that we have even more taste receptors than previously thought. Foods taste differently to different people; we have different preferences for foods. What we call flavor is a complex interpretation by our brains of how food tastes and smells, coupled with our reaction to its temperature and texture. Flavor is difficult to quantify, but people may have definite opinions about what they like or dislike.

Michigan State University Extension has grown fall raspberry cultivars in containers under high tunnels for two seasons at the Southwest Michigan Research and Extension Center (SWMREC) in order to compare productivity and quality. Part of the assessment is to find out which cultivars consumers prefer. On various days in late summer and fall, we offered samples of raspberries all picked on the same day to individuals and asked them to rate them for sweetness (data not shown), flavor and whether or not they liked the berry. People were asked to sample more than one berry of each cultivar and rate the flavor on a scale of 1 to 5 with 1= very poor to 5= excellent. The intent was to determine whether there were clear favorites among the different varieties.

We also asked tasters to make comments about the cultivars to help explain their ratings. Favorable comments included sweet, great flavor, strong raspberry flavor and good firmness. Negative comments included bitter, bland, mushy, flat, sour, off-flavor and seedy. Some comments on the appearance of the berries included color was too dark, poor color, uneven color, berry was pretty, berry shape was squat, fruit was glossy, bright red, etc. Berry appearance clearly was also a factor. The lone yellow fruited raspberry (‘Anne’) in the trial was rated as less sweet than several other cultivars even though a measure of its sugar levels (brix) actually indicated that it was sweeter.

In 2011, there were no statistically significant differences in the flavor of our eight cultivars. More cultivars were added in 2012 and evaluations were done early and late in the season. Early in the season in 2012, ‘Jaclyn’ was rated higher in flavor than ‘Anne.’ Toward the end of the 2012 season when the late season cultivars were included, ‘Nantahala’ was rated highest for flavor and ‘Crimson Giant’ was rated lowest. Results to date indicate that some of the most flavorful cultivars are ‘Caroline,’ ‘Jaclyn,’ Polka and ‘Nantahala’.

Numbers followed by a common letter are not different
Tukey LSD test( p=0.05)
NA = not available 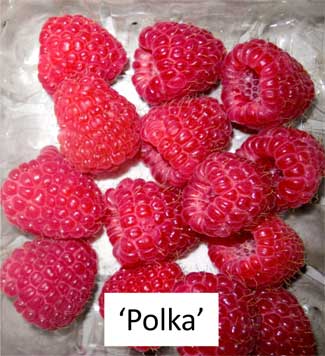 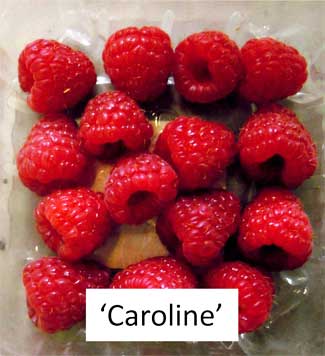 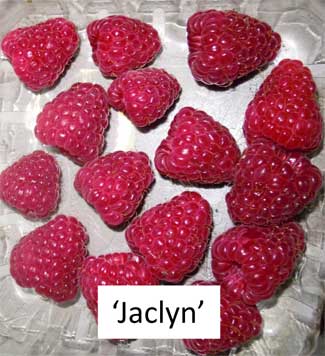 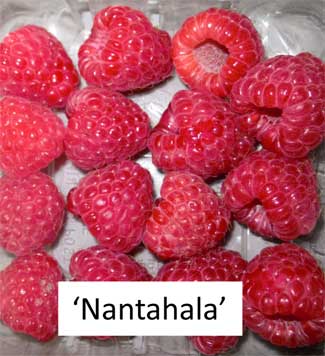 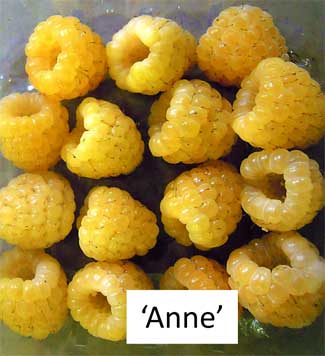