Cover crops can contribute to weed management in some unexpected ways.

This article is part two of a two-part series. The first article highlighted how cover crops can suppress weeds by diversifying and filling gaps in a crop rotation and by competing with weeds for light, nutrients and moisture. This second article addresses how some cover crops release chemicals that inhibit the germination and growth of weeds (allelopathy), while others attract beneficial organisms that feed on weeds and weed seed.

Cover crops are crops grown between harvest and planting of commodity or feed crops, usually not for harvest, but used instead for the production of biomass and the various agroecological benefits this additional biomass can provide. While cover crops are most often thought of as a means of preventing erosion and improving soil health, they can also be applied as an effective weed management tool. The ability of cover crops to suppress weeds is especially valuable in organic production systems where restriction of synthetic herbicide use leaves growers without any simple weed control solutions. Organic weed management can be so challenging, in fact, that organic farmers frequently cite weeds as the greatest barrier to organic production.

The following explains how the latter two of these suppressive mechanisms function and can be successfully applied.

Releasing chemicals that inhibit the germination and growth of weeds

Some cover crops produce compounds that inhibit the germination and growth of other plants, including weeds and crops. This property is known as allelopathy. Known allelopathic cover crop species include cereal rye, hairy vetch, crimson clover, buckwheat, alfalfa, barley, rapeseed, oat and sorghum. Allelopathic compounds are present in the roots and above-ground portions of these plants in varying concentrations, and can act against weeds while the cover crop is alive and growing, or when cover crop biomass is incorporated into the soil.

In some cases, the phytotoxicity of allelopathic compounds is increased when they are modified by soil microbes in the process of decomposition. Small seeded weed and crop species seem to be most affected by allelopathic compounds due to their greater surface-to-volume ratio and orientation nearer the soil surface where allelopathic crop residues are usually concentrated.

Unfortunately, allelopathic effects can be difficult to isolate and apply in the field. This is because the suppressive effect created by these cover species is a combination of allelopathy and the sort of run-of-the-mill plant competition described in part one of this series. Also, the production, activity and decomposition of allelopathic compounds can be highly variable based on environmental factors like soil fertility, moisture, pH and temperature. In general, the allelopathic effects of cover crop residues are quite short lived and hard to predict.

Attracting beneficial organisms that feed on weeds and weed seed

The final mechanism through which cover crops can suppress weeds is predation. Weeds are an important source of food for many organisms. While most weed predation is focused on seeds, various organisms prey upon weeds at every stage in their lifecycle. While weeds are growing, birds, insects and microbes prey on every plant part. Once seeds are produced and fall to the ground, insects, rodents, earthworms and microbes can quickly devour a large percentage. A 2003 study found that rodents and invertebrates consumed 90 percent of giant ragweed seeds left on the soil surface in the course of one year.

Including cover crops in your system increases and diversifies the habitat available to these weed predators and encourages their presence. This approach of supporting populations of control agents that already exist in a field is known as conservation biological control. Conservation bio-control of weed predators can function in a couple of different ways. According to Michigan State University Extension Bulletin E27495, “Managing your Farm to Increase Weed Seed Predation,” planting or maintaining between-field cover in the form of herbaceous strips, fence rows and hedge rows provides habitat for weed predators year-round and increases their abundance. Including cover crops within a field provides protection for weed predators, encouraging them to stay in the field longer and eat more weed seed.

A 2003 study by Adam Davis and Matt Leibman comparing spring wheat alone to wheat underseeded with red clover found a two-fold increase in giant foxtail seed predation rates in the system including a red clover cover crop (Figure 1). A similar effect could likely be achieved in vegetable systems, such as buckwheat seeded into early season broccoli or kale. There is also strong evidence that reducing tillage to leave weed seeds on the soil surface contributes to increased seed predation.

Fig. 1. Predation of giant foxtail seeds in wheat was increased by overseeding with red clover. 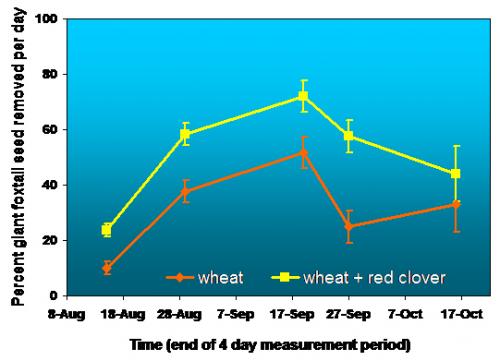 Several things to consider before planting a cover crop include:

If you can satisfactorily answer all of these questions, the cover crop under consideration might be right for you and contribute to your success with organic weed management.