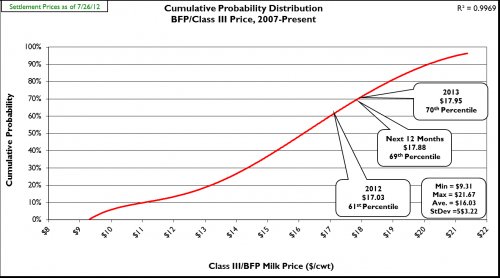 Outlook: Dairy fundamentals continue to show increasing strength as summer heat and drought conditions are affecting milk production (volume and components). The nation’s worst drought since 1956 is having devastating effects on crop conditions, thus increasing feed prices dramatically. Milk per cow and dairy cow numbers are already feeling the effects of these factors as milk per cow the past two months is growing well-below trend (+0.8 percent versus +1.5 percent trend) and the national dairy herd has shrunk by 30,000 head since April. This decline in cow numbers has not been seen since Sept. 2009. However, income over feed costs will not grow in proportion to the increases in milk prices as corn and soybean meal prices are up sharply (up 53 percent, ~+$2.70/bushel and 33 percent, ~+$152/ton, respectively since mid-Jun). Look for dairy cow numbers to continue to decline until late fall when the current heat event should be over. As we move through late fall look for cow numbers to begin a modest increase, but the lingering effects of this summer’s heat should keep milk per cow growth below trend. These factors should keep total milk output growth well-below trend for the remainder of 2012 and in to early 2013, thus, bolstering milk prices.

The consumer confidence index fell to 62.0 in June from 71.6 in Feb. and remains far short of the 90 level which is indicative of a healthy economy. However, total commercial disappearance figures for Jan.-May are above trend (+1.8 percent) and set all-time monthly records Jan.-Mar. and May. American cheese and total cheese inventories are in good shape as compared with last year (+1.7 percent and -0.2 percent, respectively). Butter inventory is high, but not at unmanageable levels (+27.5 percent as compared with June 2011). The block/barrel average price should continue to strengthen until cooler weather in the fall signals an end to the current heat wave.

Overall the U.S. dairy export market remains strong at +23 percent versus 2011 levels and the biggest bright spot in the dairy industry. May dairy product exports marked the fifteenth consecutive month U.S. dairy exports exceeded $400 million and May exports marked the twenty sixth consecutive month U.S. exports equaled 12-15 percent of U.S. total milk solids production. May exports set an all-time monthly record of $503 M (14.8 percent of total U.S. milk solids production). Exports should remain strong even though the U.S. dollar is gaining ground. Oceania’s 2012-2013 production season begins soon, but the early output is already fully committed. Milk production in the EU is up 2-2.5 percent and the euro continues to weaken making EU dairy exports more competitive. However, world demand for dairy products remains strong enough that U.S. exports are likely to remain strong. The only cloud hanging over the export market is the one due to the debt crisis concerns in many countries which could trigger another major worldwide recession. With uneven domestic dairy consumption, the current market is critically dependent upon maintaining high export volumes. Long term outlook for the export market is very bullish, but that doesn’t preclude the potential for short term problems.

Schools will begin opening in Aug. which will divert manufacturing milk to Class I bottling plants, putting even more upward pressure on cheese, butter, and Class III prices. I would expect cheese prices to continue to strengthen into September as the hot and dry weather pattern promises to continue. Cheese prices should peak in the $1.90’s, butter prices in the $1.70’s and Class III futures at about $20.00. Dry whey prices are also strengthening which hold the potential to add another 25 cents to 50 cents to Class III prices.

USDA measured feed prices remain higher than last year (+3.4 percent vs. June 2011). Also, CME corn futures gained about 53 percent (~+$2.70/bu) since 6/15/12 and soybean meal is also up about 40 percent (~+$152/ton). Milk per cow growth is now well below trend and higher feed prices, plus the long term effects of hot summer weather, should keep it below trend for the remainder of 2012. The USDA has reduced the 2012 U.S. milk production forecast to +2.8 percent and total commercial disappearance to +2.5 percent. I believe these estimates are on target as long as exports continue their current strength.

Producers need to sharpen their pencils, calculate their latest cost of production and market some milk if it fits your risk attitude and financial condition. At this point hot weather is presenting good opportunities to forward price milk. How high and how long will higher prices prevail? I see $20 Class III into the fall and $18-$19 Class III may prevail to the end of 2012 and into early 2013. But don’t gamble on trying to hit the high; market small amounts of milk as the market continues to strengthen and you will be much more successful in controlling milk price risk. Remember, despite our current bullish market, if there is a hiccup in our export market we could see prices fall faster than they have risen. Take all this into account as you make marketing decisions. Remember: marketing is first about risk management and secondarily about profit enhancement. To view a narrated PowerPoint based on this report go to my website and click on the button “Narrated PowerPoint.”