Daisies in your wheat? Potential problem for pea and carrot growers

Some call it “daisy”, others “mayweed,” but the official name of the white flower you most often see in wheat fields this time of year is “corn chamomile” or Anthemis arvensis (Photo 1). At high densities this weed can reduce wheat yields. It can also become a serious problem in vegetable crops rotated with wheat.

Why should vegetable growers care? In peas, corn chamomile can reduce crop yields, interfere with crop harvest, and act as a serious contaminant (Photo 2). Its pea-size flower bud is difficult to separate from peas at processing plants, and even a very small level of contamination can result in rejection of truckloads.

Corn chamomile is also one of several weeds that may contribute to Aster yellows in vegetable crops including carrots and celery (Photo 3). Since native aster leafhoppers commonly overwinter in wheat fields and emerge in early spring, corn chamomile is a convenient food source and may be an important source of aster yellow infection that can be transmitted to developing vegetable crops in nearby fields. MSU’s vegetable entomologist, Zsofia Szendrei, is examining interactions between aster leafhopper and several weeds, including corn chamomile.

Corn chamomile is in the lettuce (Asteraceae) family and is closely related to several other species including “stinking mayweed” (Anthemis cotula), and pineappleweed (Matricaria matricariodes). The easiest way to tell them apart is their smell when crushed: corn chamomile has a mild aroma, pineapple weed is sweet, and stinking mayweed lives up to its name. Corn chamomile can act as either a winter annual (germinating in the fall, overwintering as a rosette, and producing seeds the following summer) or a summer annual (germinating in the spring and producing seeds in the same year). The winter annual form is what you see flowering this time of year in wheat fields, and is the most problematic in most vegetable crops. In wheat crops, corn chamomile can produce over 1,000 seeds per square foot, and those seeds can survive in the soil for decades.

Overwintered rosettes of chamomile are difficult to control in the spring. Roundup has little effect on corn chamomile. Moldboard plowing can be effective, but chisel plowing and disking are often insufficient, since corn chamomile re-roots effectively following disturbance. The easiest way to manage this weed is to prevent it from establishing in the fall. This can be accomplished through use of fall herbicide applications or late fall tillage. Alternatively, late summer cover crops (e.g. oilseed radish, buckwheat or sorghum sudangrass), which winter kill can effectively suppress corn chamomile emergence and provide a clean field to plant into in early spring. 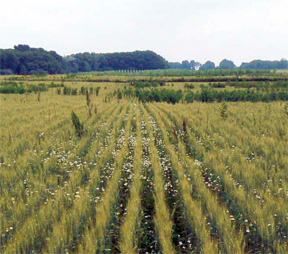 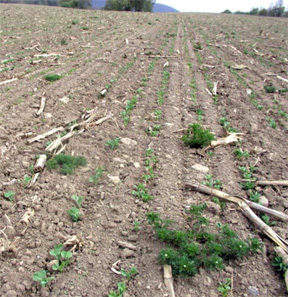 Photo 2. Corn chamomile in peas is a
serious contaminant. 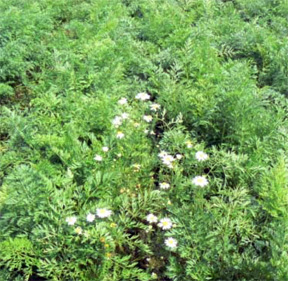 Photo 3. Corn chamomile in carrots as an
alternativehost of Aster yellows?

Dr. Brainard's work is funded in part by MSU's AgBioResearch.