Delving into the secret lives of frogs and toads

Michigan’s amazing frogs and toads remind us about the diverse array of amphibians we have in Michigan and the importance of maintaining natural shoreline habitat.

Frogs and toads (also collectively called anurans, referring to the tailless frogs and toads of the Order Anura) are members of the class Amphibia. Amphibians are cold-blooded (ectothermic), which means they cannot produce internal body heat. Instead, their temperature is at the whim of their surroundings. In the spring, frogs are active at fairly cold temperatures. However, in order to stay alive over winter during below freezing temperatures, most species are able to survive the winter by going into a dormant state underwater or underground. Aquatic species burrow into mud or simply sit on the bottom of ponds and swamps while terrestrial species like toads burrow deep into woodland soil. Amazingly, others like the Wood Frog survive under a covering of shallow soil and leaf litter on the forest floor. These frogs have special “anti-freeze” that permits their bodily fluids from freezing without causing cellular destruction.

While there are over 3,500 anuran species around the world, there are only 13 species in Michigan.  They are organized into three groups:

So how can you tell a frog from a toad? Many think of toads as “lumpy frogs.” Renowned Michigan Herpetologist James H. Harding describes the distinction, in general, in the following manner: 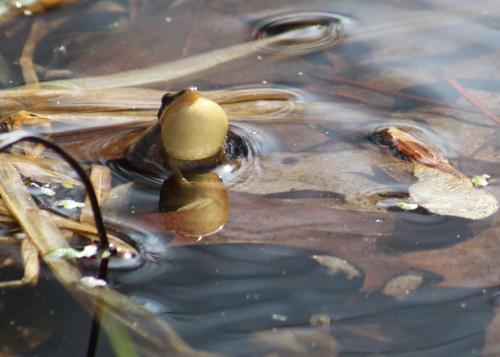 Highlights of their lifecycle include laying shell-less eggs in water. Eggs hatch to reveal fish-like, gill-breathing larva that live in the water. During this life stage, frogs and toads are specifically called tadpoles or polliwogs. The larva goes through the process of metamorphosis, in which over time they develop legs, lungs, and other modifications needed to allow them to breathe air so they can live on land. Frogs embody the classical definition of amphibian living on land, but being tied to the water for reproduction. Amphibians are important ecological predators consuming thousands of insects during their lives. In turn, frogs are eaten by many other animals including game fish, wading birds, and snakes to mention a few.

A recent study, the Natural Lakes Assessment, conducted by the Michigan Department of Natural Resources and the U.S. Environmental Protection Agency identified shoreline development as the most critical threat to wildlife and water quality of Michigan inland lakes. Shoreline buffer areas planted with native plants can help provide habitat for many fish and wildlife species. The Blanchard’s Cricket Frog, now a threatened species in Michigan, inhabits the edges of lakes and permanent ponds where shoreline vegetation provides protection and vital breeding areas.

How can development impact frogs and toads along Michigan’s shorelines?

MNFI’s Rare Species Explorer is a database containing information on Michigan's 723 rare plants and animals, including some frog and toad species. MFNI also has a large list of species and community abstracts. To find out more about data, programs, services, and educational resources available, visit the MNFI website. Individuals can also add to the statewide database by logging their observations into the Michigan Herp Atlas database.

“Amphibians and Reptiles of the Great Lakes Region” by James H. Harding is a comprehensive resource on amphibians and reptiles in Michigan and is available from the University of Michigan Press.

For more information on supporting fish and wildlife species on your inland lake shoreline, read the Michigan Department of Natural Resources resource, “The Water’s Edge.”

To learn the calls of frog and toad species in Michigan, read the Michigan State University Extension news article on identifying frog and toad calls. Or participate in the Michigan Frog and Toad Survey, a citizen science program through the MDNR, for which they have put together a list of audio files to help identify the 13 frogs and toads in Michigan.

What happens to my lake water quality monitoring data in a world of big data?