Does light quality impact the development of edema?

UV, blue and far-red light can prevent the development of edema on some plants in the tomato family.

Edema is a physiological disorder characterized by watery blisters or tumors that often form along leaf veins. It can develop on plants, especially those in the family Solanaceae, when more water is taken up by the plant than is transpired. Numerous factors influence the development of edema, sometimes called intumescence, in plants. High relative humidity is the most common factor associated with edema. Light quality, which is the composition of wavelengths that contribute to the light spectrum, can also contribute to edema development.

It is more common to observe plants with edema when they are grown without broadband radiation (sunlight), such as in a completely enclosed environment. Plants grown in an enclosed environment may not be exposed to a range of wavelengths of light, such as those outside of the visible spectrum, namely ultraviolet radiation and far-red light. Exposing plants to some UV radiation, especially UV-B, or far-red light can inhibit the development of edema in some plants. But can wavelengths inside the visible spectrum also inhibit edema development?

We grew tomato ‘Early Girl’ under 160 µmol×m-2×s-1 of light using combinations of blue (B), green (G) and two red (R) LEDs or under fluorescent lamps. The LED treatment percentages were: B25+G25+R50 (25 percent of light from blue and green LEDs and 50 percent from red LEDs), B50+G50, B50+R50, G50+R50, R100, and B100. Tomato developed the most leaflets with edema when grown under all red light while edema was absent or nearly absent when grown under at least 50 percent blue light or fluorescent lighting.

The average number of leaflets of tomato plants with edema for each lighting treatment consisting of blue (B), green (G) or red (R) light from LEDs or fluorescent lamps. Means sharing the same letter are considered to have similar number of leaflets showing the abnormality. The prevalence of edema generally decreased with increasing blue light. 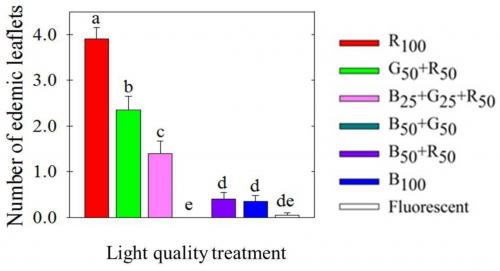 Blue light and to a lesser extent green light have been shown to prevent edema development in plants such as tomatoes, peppers and cowpeas. Plants grown without blue light (i.e., red light only) tend to have great incidences of the disorder. With respect to the fluorescent lamp, the blue light (31 µmol×m-2×s-1) and the small quantities of UV-A (<5 µmol×m-2×s-1) in the spectrum were almost sufficient to prevent edema development.

If you are interested in learning about how light affects plant growth and development, consider coming to Michigan State University Extension’s workshop “Lighting Applications in Floriculture” on Jan. 21, 2014, in Kalamazoo, Mich. Please register for this free seminar via email to Heidi Wollaeger at wollaege@anr.msu.edu.

Dr. Runkle's work is funded in part by MSU's AgBioResearch.