In 2006 and 2007, researchers and extension agents trapped a few locations in Michigan for western bean cutworm. In 2006, the first western bean cutworm moth catch ever reported in Michigan was made in Cass County. By 2007, trap catches were reported as far east as Lenawee County and north into Eaton Rapids. However, no damage was reported in southern Michigan. Instead, severe damage to corn was found in northwest Michigan in August, probably as result of a moth flight carried on wind or storm fronts out of Illinois and Wisconsin in July. As a result of the damage and concerns for 2008, the Corn Marketing Program of Michigan funded the purchase of pheromone to trap many more locations. This week and last, cooperators set up traps in many counties, and they will relay their locations back to MSU. We will the enter locations and trap catches throughout the summer onto a public web site maintained by Iowa State University. This web site generates weekly maps of trap captures. As the web site becomes active, we will get the word out in this newsletter and on Farm Radio Network.

In the meantime, for those of you trapping or noticing insects flying at dusk, do not confuse western bean cutworm with the many other cutworm moths in the landscape. Marlin Rice, from Iowa State University, took this great picture of western bean cutworm (Photo 1). Note the distinctive white band at the front margin of the front wing, as well as the white dot and crescent moon in the center of each front wing. He also developed a nice fact sheet on western bean cutworm look-a-likes, available at http://www.ipm.msu.edu/cat08field/pdf/6-26wbc.pdf

Especially don’t confuse western bean cutworm with winter cutworm, the cold-hardy caterpillar menace from last winter. There are numerous reports of this moth flying up as people mow lawns and turn on lights at dusk. This specimen (Photo 2) was sent in recently, and identified as western bean cutworm. Note the lack of white markings in the front wing - instead, there is a black kidney-shaped spot. Moving the front wing aside (Photo 3) reveals a distinctive bright orange hind wing with a black bar - eureka, winter cutworm! 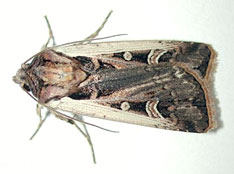 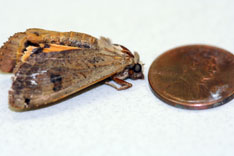 Photo 2. Note the lack of white
markings in the front wing - instead,
there is a black kidney-shaped spot. 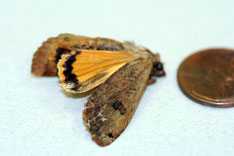