Downy mildew is a serious disease in both greenhouse and nursery-grown herbaceous perennials. Recognize the symptoms and understand the IPM strategies to prevent this disease from getting started in your operation.

Downy mildew causes foliage blights and distortion in different species of perennials. Downy mildew is favored by cool, wet weather and can develop rapidly and is difficult to control. Some of the herbaceous perennials prone to infection include Rudbeckia (Photos 1 and 2), Lamium (Photo 3), Aster, Hellebore (Photos 4 and 5), Coreopsis and Veronica. 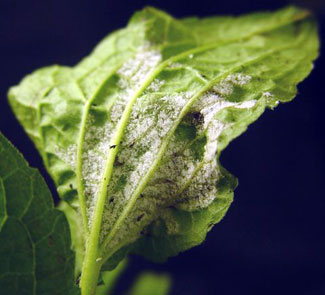 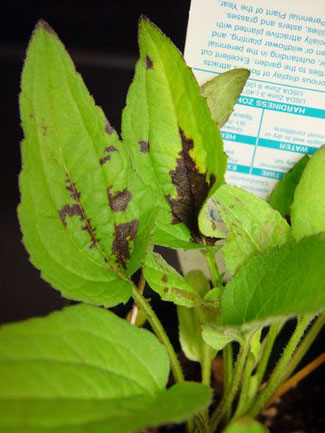 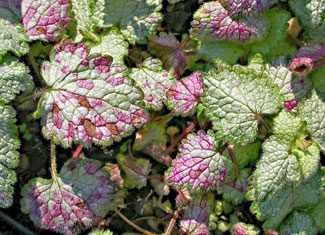 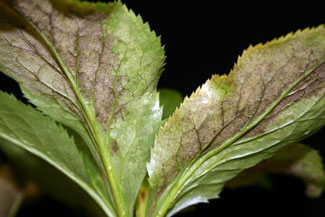 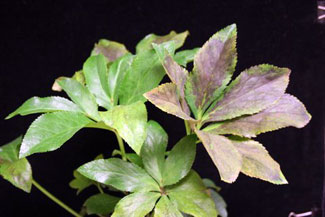 Symptoms vary and can be mistaken for other plant disorders such as frost damage or nutrient imbalance. Leaves may become mottled and chlorotic, resembling nutritional deficiencies, but generally the lesions are angular and bounded by major leaf veins. Downy mildew sporulation develops on the underside of leaves and is usually gray, brown or purple and has a downy texture. On coreopsis, the fungal sporulation is white, whereas on Rudbeckia it is dark gray.

In the perennial plant industry in Michigan, oomycetes are controlled primarily by cultural practices such as water management, pathogen exclusion on seed stock, but primarily fungicides are the main protection measure. The use of some conventional fungicides alone to control these problems is expensive, and frequent usage may hasten the development of resistance. Failure of control of some oomycetes has already been noted in Michigan, such as downy mildew in Rudbeckia and a reduction in control in Lamium.

The use of low risk, directed action fungicides has been evaluated at MSU on Lamium, in particular, and these types of products could allow for a reduction in the use of traditional chemical fungicides. They can also be used as alternation products in mefenoxam- (Subdue Maxx) based programs. However, unless there is known resistance to Subdue Maxx, it should still be used in the program, but judiciously to avoid developing of resistance in the pathogen population.

Cultural practices such as water management and pathogen exclusion on seed stock are a portion of the IPM regime for controlling oomycete pathogens, but conventional fungicides are currently the primary means of protection. The downy mildew program recommended by Drs. Hausbeck,Daughtrey and Warfield on impatiens would be appropriate for application to herbaceous perennials.

Use when downy mildew has not been seen this year on your premises or in the landscape nearby, and your supplier has not experienced a disease outbreak.

5. Repeat #2, 3, and 4 at two-week intervals, as needed. Add mancozeb (Protect, etc.) to any treatment if desired for Alternaria leaf spot control.

Last application, shortly before shipment: Subdue MAXX + Adorn drench, as in #1 above.

Use when downy mildew has been found on impatiens on your premises or nearby, or your supplier has had a disease outbreak.

2. One week later: A strobilurin (Compass O or Disarm or Fenstop or Heritage or Insignia or Pageant) spray, using high label rate + mancozeb (e.g., Protect DF) as a tank-mix.

Last application, shortly before shipment: Subdue MAXX + Adorn drench as in #1 above.

Plant tolerance to all these products has been found to be acceptable in research trials for many plant species and some are listed on the labels of the specific fungicides. However, due to the large number of species and their associated varieties or cultivars of ornamental plants and due to variable growing conditions, it is impossible to test every plant and variety or cultivar for tolerance to these products. Neither the manufacturers, sellers nor the educators listed in the document have determined whether or not these products can be safely used on all ornamental plants. The professional user should determine if these products can be used safely prior to commercial use. In a small test area, test the recommended rates on plants for phytotoxicity and disease control prior to general use.