Downy mildew of hops already reported in Michigan for 2014

As the first hop bines emerge, growers are already reporting symptoms of downy mildew infection. Early and consistent protectant spray strategies will be critical to season-long control of this difficult disease.

Already this season, Michigan hop growers have reported active downy mildew infections in the water-soaked stage despite applying protectant fungicides. Downy mildew is caused by Pseudoperonospora humuli and can cause significant yield and quality losses depending on variety and when infection becomes established. In extreme cases, cones can become infected and the crown may die. 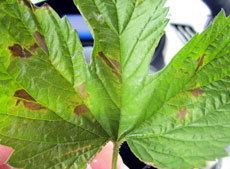 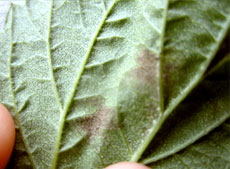 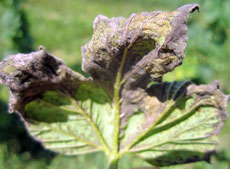 The causal agent of downy mildew overwinters in dormant buds or crowns, moving into buds during early spring and then into the tissue of the basal spikes as shoots expand. The pathogen produces copious spores on the underside of infected leaves. According to “Field Guide for Integrated Pest Management in Hops,” infection is favored by mild to warm temperatures – 60 to 70 degrees Fahrenheit – when free moisture is present for at least 1.5 hours, although leaf infection can occur at temperatures as low as 41 F when wetness persists for 24 hours or longer.

It takes a multipronged approach to manage for downy mildew. Growers should utilize a protectant fungicide management strategy to mitigate the risks of early and severe infections. Keep in mind that varieties vary widely in their susceptibility to downy mildew and select the more tolerant varieties when possible. Clean planting materials should also be selected when establishing new hop yards since this disease is readily spread via nursery stock. Michigan State University Extension also recommends that growers pull all basal foliage during spring pruning. All pruning materials should be removed from the hopyard and covered up or burned to reduce inoculum.

Cultural practices alone are not enough to manage downy mildew. Well-timed fungicide applications just after the first spikes emerge, which is occurring now in many Michigan locations, and before pruning have been shown to significantly improve infection levels season long. Subsequent fungicide applications should be made in response to conducive environmental conditions – temperatures above 41 F and wetting events. Protectant fungicide strategies are particularly important during the year of planting to minimize crown infection and limit disease levels in the future. Fungicides containing copper, boscalid, pyraclostrobin, phosphorous acids and a number of biopesticides have varying activity against downy mildew. For organic growers, OMRI-approved copper formulations are the most effective.

Some growers have are already spotted downy mildew in Michigan hopyards this season, including those applying protectant applications of Aliette. Washington State University has documented resistance in the downy mildew pathogen Pseudoperonospora humuli to fosetyl-Al, the active ingredient in Aliette. Based on these findings, growers are cautioned from relying on Aliette for downy mildew management. For a complete list of fungicides labeled for the control of downy mildew on hop refer to the resource “Pesticides registered for use on hops in Michigan 2014.”

If you already have downy mildew established in your hopyard, cultural practices will be very important in regaining ground as the season progresses. According to Oregon State University, diseased shoots on the string should be removed by hand and healthy shoots retrained in their place. Remove superfluous basal foliage and lower leaves to promote air movement in the canopy and to reduce the duration of wetting periods. If there is a cover crop, it should be mowed close to the ground. If hopyards have no cover crop, cultivation can help dry the soil and minimize humidity. Keep nitrogen applications moderate.

Pesticides registered for use on Michigan hops updated for 2016