Protect your grain quality and marketability this fall by scouting and properly identifying potential corn ear rots, such as gibberella and aspergillus.

With widely variable planting dates and significant drought conditions, followed by periods of heavy rainfall, corn ear rots are among the challenges that producers should keep an eye on this fall. Western bean cutworm feeding damage, which varies greatly with moth flight and the timing of flight relative to the emergence of tassels, further sets the stage for highly variable instances of corn ear rots. There is also potential in non-Bt hybrids and refuge corn for feeding damage caused by second generation European corn borer and corn earworm larvae. Corn ear rots can gain a foothold in ears that have husk and kernel damage caused by insect larval feeding.

While there may be many types of molds found in corn fields this fall, the most common mold of concern being seen is low levels of gibberella. Gibberella ear rot, a pinkish -white mold that infects kernels, is caused by the same fungus that causes Fusarium head scab of wheat. Gibberella may be more severe in continuous corn or corn following wheat. Gibberella can cause the buildup of vomitoxins that can reduce feed quality of grain and DDGs produced in ethanol production.

There is also potential for a more troubling disease, aspergillus (olive green mold), which can cause problems with aflotoxins in the grain. Aflotoxins are potent – grain contamination above 20 parts per billion can restrict use for human consumption and dairy feed. Scouting, proper identification and assessment of the incidence and severity of ear rots can be important in assuring grain quality and marketability. Kiersten Wise and Charles Woloshuk, Purdue University Department of Plant Pathology, have written an excellent pair of bulletins that explain the biology of these diseases and are referenced in the links at the end of this article.

Management practices that can reduce the impact of potential toxins and maximize grain quality going into storage are: 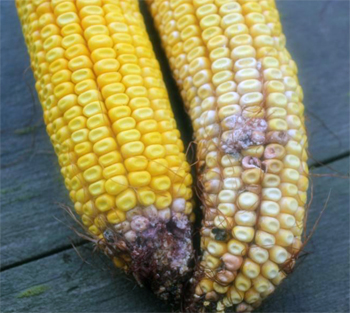