Every year it can be desirable to enhance return bloom on apple varieties that tend to be biennial. This is especially important on trees that have a heavy crop load like we are predicting for this year (2013). Most years, treatments of summer NAA applied at five, seven and nine weeks after bloom will increase return bloom even on varieties that have heavy crop loads and tend to have poor return bloom. This timing is made after the thinning window and any potential thinning from NAA has past. Fruits are often 1 inch in diameter and won’t respond to any NAA thinning action. Flower bud initiation has already begun, but according to Michigan State University Extension it can be enhanced by NAA treatments during the next 30 days after the thinning period ends.

Summer Ethrel can also enhance return bloom by treatments of 200 ppm made at the same timing of five, seven and nine weeks after bloom. However, summer Ethrel can thin 1-inch diameter fruit as well as advance maturity of early maturing varieties.

A study was initiated in 2000 on biennial varieties. These varieties (Goldens, Jonagold, Paulared, Red Delicious, Fuji Gingergold and Empire) were treated with three applications of NAA at 5 ppm (Fruitone N). Over seven years on average, return bloom was improved by 23 percent and some years as much as 55 percent. These trees were selected because they had heavy crop loads and were not thinned chemically (Figure 1). 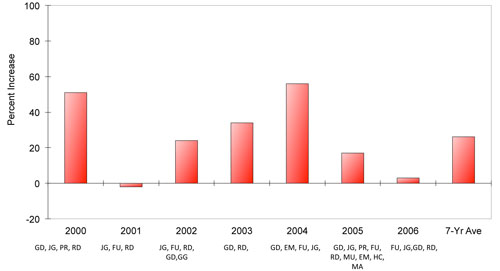 Apply 5 ppm (2 ounces per 100 of Fruitone N) of NAA starting five weeks after bloom and apply two additional spray treatments at seven and nine weeks after bloom. The rate of NAA applied per acre should be adjusted to tree row volume (TRV) levels. The applications can be concentrated, but treatments will benefit from increased water amounts. Try not to concentrate water amounts greater than four times. These sprays can be added right to the cover sprays during that time period. Some years these treatments do not perform well, especially during droughty years.

Varieties that have a moderate to high biennial bearing tendency should be considered for bloom enhancement sprays (Table 1). Growers report that they have the best results by treating with summer NAA every year, regardless of crop load.

Summer NAA treatments will not cause any adverse effects to the trees or crop. Treatments during extremely hot temperatures (maximum temperatures above 90 degrees Fahrenheit) should be avoided. If surfactant or oil is included with the application, consider reducing the NAA amount by one-third. Fruitone L has been reported to be slightly more effective than Fruitone N. Follow the guidelines listed below.