Immature and adult eriophyid mites suck on the sap in the needle. This feeding can discolor and distort foliage of many conifer species. Currently, we have found these mites on Fraser fir, spruce, concolor fir and hemlock, but they can also cause damage to Scotch and white pine.

When many mites are present, their damage gives the needle a dusty, bronze to rust-colored appearance. Similar damage can occur from winter injury, nutrient deficiency, drought or herbicide damage. To tell if the damage is caused by these mites, you will need to look at the needles with a hand lens and even then you may over look them if you don‘t know what your looking for. Eriophyid mites are very tiny, and have a carrot-shaped body with only four legs on one end. They can be clear, tan, cream or orange-colored.

To scout for these insects, zig-zag through your fields randomly checking trees for mites and looking for trees with bronzing or distorted foliage. Look at both the new and previous years’ growth. Often growers ask at what levels they should consider spraying. To determine if you need to treat your field, North Carolina State University recommends for hemlock west mite to keep track of the percentage of shoots that have mites, as well as the greatest number of mites on an individual needle, adding the number on both the upper and lower surface of the needle.

To determine if a pesticide is necessary, both of the following criteria must be met:

Keep scouting weekly until you see mite numbers begin to decrease. This mite likes cool and dry weather and numbers can increase quickly if the conditions are right. With this past week’s hot weather, mite numbers should begin to fall off.

Products that are used to control spider mites may not control eriophyid mites that are biologically different. Successfully treating for eriophyid mites requires using a miticide effective against eriophyid mites, such as Avid (abamectin), Sevin (carbaryl) or Envidor (spirodiclofen). Remember to continue to scout trees even after treating trees to determine if mites were killed. Also, you will want to scout trees in the fall when cool temperatures return. 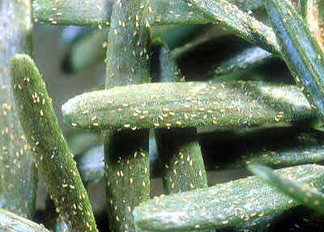