Our cool weather has likely slowed the work of the European paper wasp too. Polistes dominulus was first discovered in the United States in Cambridge, Massachusetts in 1981. It was first found in Michigan in 1994. P. dominulus is the most common paper wasp in Western Europe. The European paper wasp prefers to nest in cavities, but will build on a vertical surface as long it is protected by some type of overhang. This wasp seems to attack people with much less provocation than our native species of paper wasps. Paper wasps can be controlled by spraying the nests with one of the many long-range wasp and hornet sprays, and now is the time to do it because the nests are small and the wasps are not as aggressive as they will be later in the summer.

I recently completed a survey of our top ten insects that invade Michigan homes for Dr. Whitney Cranshaw with Colorado State University. I mentioned the European paper wasp. Here is what Whitney had to say about them in Colorado.

“I noticed your comment on the European paper wasp. That insect has been huge out here in recent years. It took over in a phenomenally short period of time. In addition to the stinging/nuisance issues (complicated by its very close superficial similarity to the western yellowjacket), the insect has decimated backyard Lepidoptera. It has had such an impact that I no longer discuss cabbageworms or hornworms in Master Gardener programs – they are too rare. Also, I usually drop butterfly gardening as a topic, as they eat the butterfly larvae.”

Whitney put together a very nice fact sheet on them. See it at: http://www.ext.colostate.edu/pubs/insect/05611.html 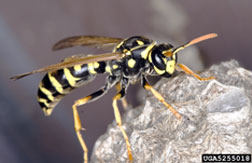 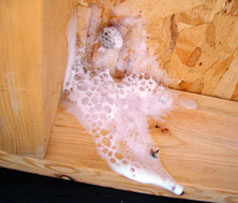 Save yourself and your butterfly
caterpillars, locate and spray 'em
now when they're easy to control.
Photo by H. Russell, Diagnostic Services.