Experience with growing tomatoes in high tunnels: What about crop rotation?

Many high tunnel producers desire to grow tomatoes, and many times that is all they want to grow. If that is the case, growers should consider movable tunnels or containers to overcome crop rotation challenges.

Tunnels have made a big impact on production, especially for many small-scale producers. High tunnels have the potential of season extension, improving yield and quality and making organic production possible for many crops, especially a crop like tomatoes that can be difficult to produce organically in our climate. This is the second report on my observations from seven years of conducting high tunnel tomato trials at Michigan State University’s Southwest Michigan Research and Extension Center (SWMREC) in Benton Harbor, Mich. (Read the first report on insects, diseases and weeds; the third report on fertilization, quality and yield; and the fourth report on irrigation, training and temperature management.)

Initially, tomato growers using tunnels generally use a field production approach and place transplants in the ground. If growers have suitable sized equipment, they may shape and cover beds with plastic mulch. Other growers plant through holes cut in weed-inhibiting ground cloth. Both systems work, but both have limitations and the disadvantage of restricting crop rotation.

Even without being watered directly, weeds grow between rows in a raised bed, plastic-mulched, high tunnel system. Growers need to contend with these between row weeds through herbicides or cultivation since their roots will eventually find the water and nutrients supplied through the drip irrigation. Ground cloth solves this problem (except immediately around the plant), but it will have to be removed at the end of each season so soil can be worked the following year.

The biggest disadvantage of both approaches is that if the producer wishes to grow only tomatoes or a limited number of crops, how do they practice crop rotation? Despite what manufacturers claim, tunnels are not easy to move unless they are small. Some small units are on skids and can be moved by chaining them to a tractor. Others are on a rail system (Photo 1) twice as long as the tunnel, allowing the tunnel to be moved along the rail providing the possibility of an every-other-year rotation, or longer if they can extend the rail system. However, most tunnels have legs anchored in the ground and can only be removed and replaced with some difficulty, impeding crop rotation.

Another way to solve the rotation problem is to grow in poly bags or buckets (Photo 2), essentially rotating soil, allowing growers to keep tunnels stationary. Buckets are more expensive ($3 to $5 each depending on size, color and quantity) and will last longer, but should be emptied and sterilized before using them again with the same crop. Poly bags are inexpensive at around $0.40 each and would be difficult to empty and reuse, but could be emptied and recycled. 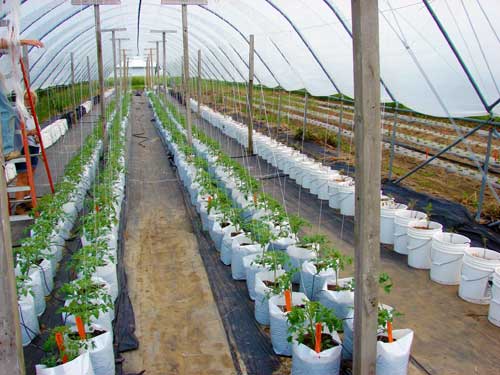 An additional expense with containers is filling and placing them in position. Pre-filled bags are available for a price ($2 to $4 depending on size, quantity and soil mix). Be sure to get a mix suitable for long season production – the cheapest bags from your local big box store will not work. Growing mixes with high organic matter may lead to some nutrient deficiencies (copper) rarely seen when growing in soil. I have used the same containers and same soil for two years with no observed problems as long as they are fertilized with a balanced fertilizer and micronutrients. Containers and soil used a second year will have a significant amount of weeds that will need to be removed before planting the new crop. Used growing media can be spread on an area of the farm needing organic matter and then planted to an unrelated crop.

For high tunnel research reports generated by Michigan State University Extension at SWMREC, go to the SWMREC Annual Reports website and look at the Annual Reports starting in 2005.