Lawn care company asks question about lack of grub control at some sites. Failure to water-in insecticides may be the problem.

We are experiencing some grub breakthrough issues on lawns where we applied a generic brand of imidacloprid. These applications were made as a liquid spray in combination with fertilizer. My records indicate that treatments were made on June 15 and 18. Do you have any idea why these treatments did not work?

We have recently reviewed our grub control research test results from the last 20 years. This includes some 24 different imidacloprid treatments made in 12 different years. Imidacloprid has given a consistently (18/24 test treatments) high level of grub control (more than 85 percent) when applied at label rates. In four tests where imidacloprid was not as effective (grub density was reduced by 60 to 85 percent), treatments were applied between May 21 and Aug 9, but were not watered-in. In two tests where there was no reduction in the number of grubs, imidacloprid was also not watered-in, and in one of the tests it was not applied until October.

First, nearly all of our tests with imidacloprid were with Merit 75, before the patent ended. However, other brands of imidacloprid should also work well. Overall, if imidacloprid is applied at the label rate between May 21 and August 30, and watered-in immediately with 0.5 inches of irrigation, it will provide 85 to 100 percent grub control.

I suspect that in your case, lack of irrigation after spraying is the most important reason you are seeing some failures. I understand that even when you tell customers to water after you spray, they may fail to do so. Watering before you spray an insecticide can also be helpful, as long as it is also watered-in after you spray. We have seen a similar problem with granular formulations of insecticides when they are not watered-in. 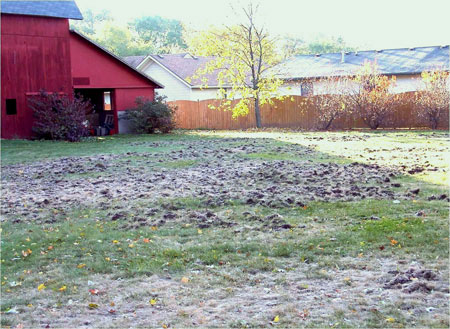 Damage to a home lawn in DeWitt, Michigan caused by European
chafer grubs and skunks.

Tips for reseeding lawns in spring