Most N, P and K fertilizer prices were cheaper in May 2014 compared to May 2013. The price of urea was higher due to supply shortages.

Table 1. Prices of the big three fertilizer nutrients in May 2014 compared to May 2013

The year-to-year price variations during this period are shown in Figure 1. As expected, most fertilizers rallied from dramatic off-season price drops that started in August 2013.

Industry specialists, such as David Asbridge, president of the NPK Fertilizer Advisory Service, believe that the strong urea market was due to shortages in supplies. The Russia/Ukraine situation has hurt some production out of Eastern Europe. Also, urea imports into the U.S. have been lower than expected in the Gulf Coast as well as from Canada due to the railroad issues and frozen rivers in the cold winter. The expectation is that urea prices will weaken during the summer lull. Also, the Chinese are set to export a record 8.5-9.5 million tons of urea this year, which will depress the market as well.

Michigan State University Extension would like to emphasize that despite the current favorable fertilizer market, any unforeseen deterioration in global economic and political conditions can cause dramatic price shifts, impacting local farmers. 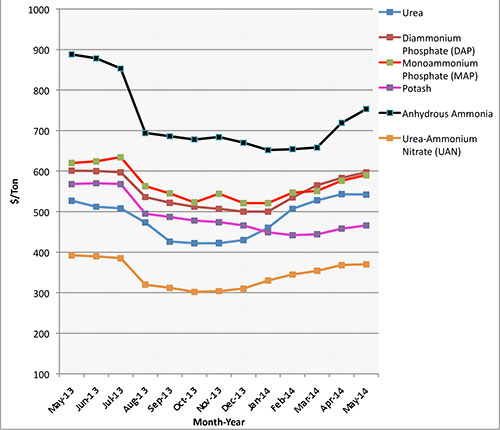