In this follow-up to last week’s article on the effects of weather on codling moth, we focus on codling moth management. The weather has been cold and wet with little to no codling moth emergence, thus no need for control actions. This week’s forecast suggests that day and night temperatures will be above normal over the next seven to 10 days, which should bring widespread emergence of adult codling moths and the beginning of oviposition (egg laying). To get the most benefit from a codling moth control measure, growers should treat a block after moth captures have been recorded and the accumulation of growing degree days (GDD) required for a particular action, as indicated in Table 1, has taken place.

The vast majority of insecticides used for codling moth control are aimed at killing larvae (Table 2). This is not an easy task, as young larvae feed and enter the fruit within a few hours of hatching. Options for controlling codling moth larvae include conventional contact poisons, like the organophosphate (OP) compounds, Guthion and Imidan and a number of pyrethroid insecticides. These materials kill larvae that crawl across or consume the lethal residues. They primarily target newly emerging larvae at codling moth egg hatch, and thus are typically applied beginning at 250 GDD post biofix. Pyrethroid insecticides appear to be more effective in the spring for first generation codling moth, than summer and have a broad activity spectrum. Pyrethroids are toxic to mite predators and should be used carefully to avoid outbreaks of phytophagous mites. Apple growers should be aware that resistance to the OP compounds has been detected in Michigan orchards throughout the state, most extensively in the Fruit Ridge and Southwest production areas. The levels of resistance detected were high enough in those orchards that sole reliance on OP's for codling moth control is not likely to provide sufficient control. In addition, populations resistant to OP compounds may also be resistant to pyrethroids.

Delegate (spinetoram) is a new compound in the same insecticide class as SpinTor (spinosad). The active ingredients of both Spinosyn compounds are similar in that they are waste metabolites produced during the growth of a bacterium. A major difference between the two AI's however, is that spinetoram is much more lethal to codling moth larvae. In small-plot and on-farm trials, Delegate has provided excellent control of both first and second generation codling moth. It kills larvae as they hatch and begin feeding, thus should be applied at the larvicidal timings indicated in Table 1. Delegate has very good activity against obliquebanded leafrollers, suppression activity on apple maggots, and limited lethal action on plum curculio when ingested (Table 3).

The neonicotinoids, Assail and Calypso, will provide very good control of codling moth with a residual action of 10-14 days. Proper timing and coverage is required to achieve control. These compounds are primarily larvicidal, but also have some ovicidal activity when applied over the top of the egg. Field trials have indicated that use of Assail in combination with pyrethroids or carbaryl can result in outbreaks of phytophagous mites. Assail and Calypso are fairly broad-spectrum materials. In contrast to the insect growth regulators and Diamides, the major secondary targets of these neonicotinoids are the sucking insects, specifically aphids (GAA and RAA) and leafhoppers (Table 3). The initial application of Assail or Calypso targeting first generation codling moth will also provide control of plum curculio, Oriental fruit moth and spotted tentaform leafminer, and they will control apple maggot.

Clutch/ Belay, another neonicotinoid registered for use in pome fruits, is a broad-spectrum material targeting codling moth as well as aphids, leafhoppers, plum curculio, spotted tentiform leafminers, Oriental fruit moths and pear psylla. Research trials have indicated that Clutch/ Belay is not as effective as Assail or Calypso for second generation codling moths.

Proclaim is a codling moth control material in the Avermectin class of insecticides. It has provided good control of first generation codling moth in trials at the Trevor Nichols Research Complex and in on-farm demonstration trials. Proclaim also has very good activity against obliquebanded leafrollers.

Intrepid is an insect growth regulator that provides good control of codling moth with a residual action of about 10-14d. This product is an insect growth regulator that primarily affects codling moth larvae, but also has substantial activity on eggs, and has sublethal effects on adults. The best results have been achieved by taking advantage of the ovicidal and sublethal effects. For example, applying an early spray at biofix plus 150-200 GDD or a delayed timing of 350 GDD. At the early timing, Intrepid will also control obliquebanded leafroller larvae that are still present in orchards harboring high numbers of this troublesome pest. The addition of an agricultural adjuvant is recommended to improve initial spray deposition. As a cautionary note, growers should be aware that populations resistant to OP compounds might also be resistant to Intrepid.

Avaunt is an oxidiazine material that provides fair control of codling moth with a residual action of about 10-14d. Avaunt will also provide control of plum curculio and leafrollers.

There are several new pre-mix insecticides labeled for codling moth control, including Voliam flexi (thiamethoxam + chlorantraniliprole), Tourismo (flubendiamide/buprofezin), and Leverage (imidacloprid + cyfluthrin) that combine two active ingredients as pre-mix formulated compounds. When these are used for codling moth control care must be taken NOT to use a product in the following generation that is in the same insecticide class as either of the pre-mix active ingredients.

* May cause mite flaring in combination with carbaryl or pythrethroids that kill
predacious mites.

Growers should not overlook including granulosis virus in their codling moth management program. This is a naturally occurring virus that goes by the scientific name of Cydia pomonella granulovirus (CpGV). Both of the two commercially available products, Cyd-X and Carpovirusine, are effective. Optimal use of the virus is against young larvae before they penetrate the fruit. The best way to target young larvae is to have the virus present on the surface of the eggs when they begin to hatch. Hatching codling moth larvae will ingest the virus as they consume their eggshells.

There are many options for incorporating virus into your codling moth management program. Deciding how much, when and how often to apply product can be quite confusing. Keep in mind the following factors when trying to sort things out:

1) CpGV must be ingested by the codling moth larva and may not kill it immediately.
2) The virus breaks down in the environment, thus a spray may only be effective for a week or so.
3) The virus is highly lethal, a few OB's are all that are required to cause death. Our overall experience is that frequent application of a low rate of product is the best approach for using this biopesticide.

Growers can opt to use the virus as part of a multi-tactic codling moth control program. Rotating it with chemical insecticides is a good means of combating resistance. We suggest the following approaches to incorporating codling moth virus into a management program. If you want to restrict your use to a single generation, target the first generation. Some virus-infected larvae will not die immediately, allowing them to cause fruit damage and even complete larval development. Fortunately, stings or deeper entries in small fruits attacked by first generation larvae often fall off the tree or are removed by thinning. Additionally, research conducted in 2003 revealed that less than 4 percent of the individuals that managed to complete larval development survived to pupate and emerge as summer generation adults. Thus, applications against the first generation can greatly reduce the size of the summer generation that will need to be controlled.

Regardless of the generation targeted, it is best to make at least two applications. If you want to rotate a CpGV product with other controls, try applying a chemical insecticide as the first spray at the start of egg hatch (250 GDD) and the virus as the second spray. This is because more eggs will be present and covered by the virus spray at the later timing. The insecticide and virus could then be rotated again, or the virus could be applied weekly at a low rate for the remainder of the egg hatch period.

Combined use of an ovicide and larvicide

Over the past few years, we have been evaluating novel codling program that takes advantage of the ovicidal or larvicidal properties of various compounds. In one program, an ovicidal material is applied at the start of egg laying and a larvicidal material is applied at a delayed timing of 350-400 GDD. For this delayed timing program we used Rimon as the ovicide and followed with either Assail, Calypso, Altacor or Belt as the larvicide. All programs proved highly effective in controlling first generation codling moths. The delayed larvicidal treatment is possible because the early ovicide treatment kills eggs that would have hatched in the period starting at 250 DD. Another nice feature of this program is that the delayed application of the larvicide is a more efficient timing than the standard first cover timing of 250 DD. Only a small portion of the first generation egg hatch occurs between 250-350 DD, ca 15 percent, while more than 50 percent of the hatch occurs over a two to three week period beginning at 350 DD. The combined strategy also shortens the period of time that larval control is necessary, presenting an opportunity to reduce the number of sprays needed to achieve control. 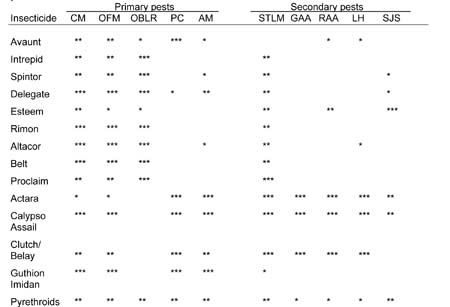 The work of Dr. Wise and Dr. Gut is funded in part by MSU's AgBioResearch.