Temperatures dropped the beginning of this week into the mid-20s in many areas of northern Michigan. Reports of damage from growers are quite variable across the region. Frosts damage is characterized by wilting of the new shoots followed by browning of the affected growth. (See photos.) Christmas tree varieties that seem to have suffered the most injury are ones that break bud early and had the most growth – Douglas-fir (Lincoln source), Concolor, Corkbark and balsam fir. In our true fir variety trials, some of the exotic firs that showed injury were Siberian (Abies sibirica), Nordman (Abies nordmanniana), Ciliican (Abies cilicica), Farges (Abies fargesii) and Mayr Sakhalin (Abies mayr sachalinensis). When we have experienced frost/freeze in prior years, we have found that most trees are able to continue to put on new growth and little evidence of the frost damage remains later in the season. In some cases, it may be necessary to prune out damaged shoots, particularly if damage occurs near the terminal shoots.

The characteristic curling of the new growth caused by balsam twig aphid is showing up on Fraser and balsam fir trees. Insecticide treatment (unless systemic) from this time onward will likely do little to prevent damage; aphids are well protected within the shoots. The good news is that needles will continue to elongate for several weeks. By late summer, much of that damage will be outgrown. One thing you can do for yourself is to make a little map of your field that shows where the trees with the most aphid damage are this year. Then next spring, you will know where to focus your scouting and management activities.

If you are in the Pine Shoot Beetle Compliance Program and need to apply a cover spray for pine shoot beetle, get ready, especially if you are in southern Lower Michigan. The best time to spray will be right around 450-500 growing degree days base 50. At this point, the beetles are more or less starting to tunnel into shoots in synchrony. In contrast, if you wait until later in the summer, some beetles will be deep inside the shoot, some beetles will be dispersing; some will be beginning tunnels and so forth. If you are enrolled in the compliance program, be sure to use an approved insecticide such as Lorsban or Baythroid.

Douglas-fir needle midge is a relatively new pest to Michigan. To date, the only Douglas-fir needle midge we have found are around the Cadillac area. Needle midge adults are emerging now and live only a couple of days, just long enough to mate and lay eggs. The eggs are deposited in groups on newly expanding buds. Midge eggs hatch in a couple of days, and the larvae immediately bore into young needles. Larvae feed in the needles throughout the summer. When they are full grown in the fall, the larvae drop from the needles and spend the winter in the soil beneath infested trees. Apply a registered insecticide within a week after first adults are detected.

If you have Scotch pine trees that had high densities of pine needle scale last year and your fields are in southwest or southeastern Lower Michigan, you need to be scouting your trees right about now. The first generation of eggs will usually hatch around 300 degree days base 50. It's not necessary to apply an insecticide immediately after you see the reddish-colored crawlers. In fact, it's best to let the crawlers settle down and establish feeding sites on the needles (the hyaline stage – 400-500 GDD base 50). At this point, the immature scales are exposed and have not yet secreted the white, waxy protective armor. If you can apply your spray at this point and if you get good coverage, you should get good control. 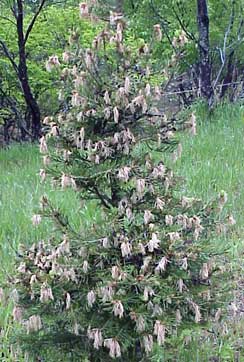 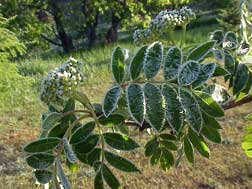 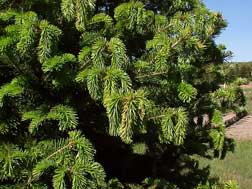 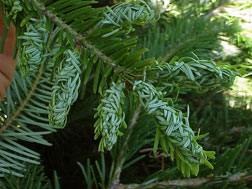 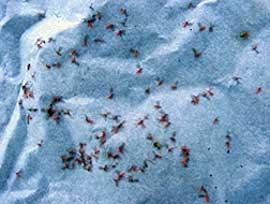