Fusarium-related decay on potatoes in Michigan

Severe cases of potato dry rot in Michigan are causing some growers to replant fields.

There have been some severe cases of potato dry rot in Michigan in 2013, so far reported mainly on the cultivar ‘Pike’, resulting in very poor stands. Some fields are so badly affected that the fields are being replanted (Photo 1). The seed pieces are generally rotted, but in some case where there is even mild rot, the stems have not developed (Photo 2). 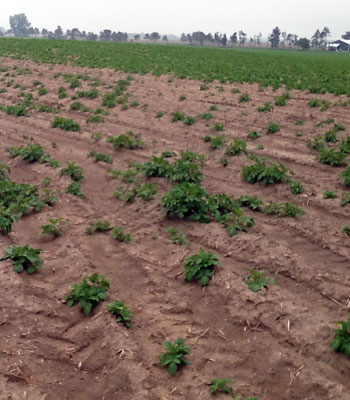 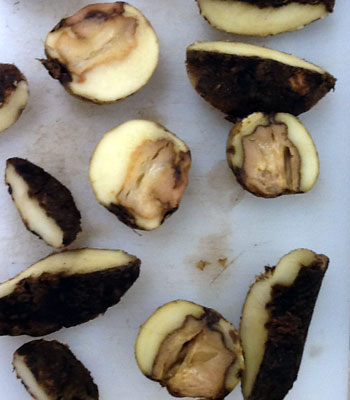 Dry rot is one of the most important establishment and post-harvest diseases and can be caused by several Fusarium species. In the United States, yield losses attributed to dry rot in storage is estimated at $69 million to $228 million, according to unpublished data from USDA. Currently, there are at least 13 known Fusarium species responsible for potato dry rot in the United States, and 11 of these species have been recently reported in Michigan.

In severe cases, there is little else that can be done except to replant the field with either potatoes or an alternative crop. Once emergence drops below 80 percent, growers should contact their local consultant or Michigan State University Extension educator to discuss options. Seed treatments are effective, but in situations where seed is extensively infected, efficacy could be impaired. There is no curative action for Fusarium seed piece decay.