Giant hogweed makes a splash in the media, but is rarely found in Michigan.

Giant hogweed (Heracleum mantegazzianum) has gotten a lot of press in recent weeks and to the average person, it may actually look like a beautiful architectural addition to the landscape. The plant was introduced from Eurasia by plant collectors in the early 1900s for arboretums and gardens. Reaching a mature height of 6 to 12 feet, giant hogweed may be aptly named, but can be difficult for the outdoor enthusiast to identify. With very limited distribution in Michigan, a vigorous tramp through the woods or wetlands is not likely to expose anyone to hogweed according to Michigan Department of Agriculture and Rural Development (MDARD) experts.

A member of the carrot and Queen Anne’s lace family, giant hogweed exhibits many of the same characteristics of other members of this group such as cow parsnip and angelica, including having sap that can cause severe dermatitis. The plant bears chunky, greenish-purple stems topped by platter-sized, dissected foliage. Flower clusters borne in summer are also reminiscent of carrot, parsley or Queen Anne’s lace and are borne on strong, hairy stalks well above the foliage. A cluster of seeds is produced in late summer.

When people come into direct contact with the sap present in the seeds, foliage or stems, they may react with skin and eye irritation. Sunlight “activates” the dermatitis reaction causing it to create painful blisters that may scar.  Contact with eyes can cause temporary or even permanent blindness.

Giant hogweed made it to the USDA dangerous noxious weed list and has been scouted for in Michigan since 1998. With recent media attention, folks are on the lookout for the plant, but are not likely to find it. “This is not a weed-on-the-move,” stated one MDARD official. For the most part, people are seeing our Michigan natives, angelica and cow parsnip – especially in wet ditches. 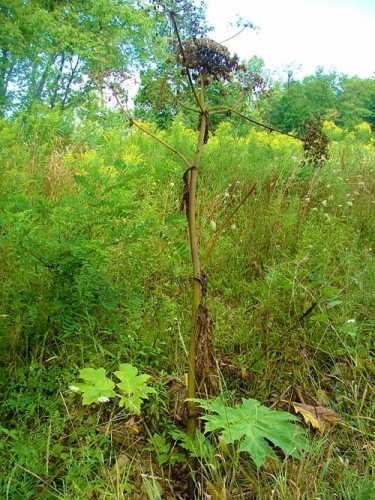 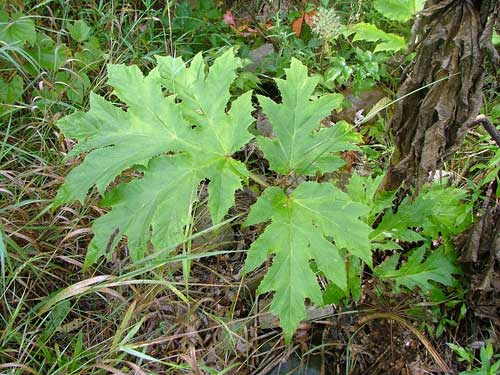 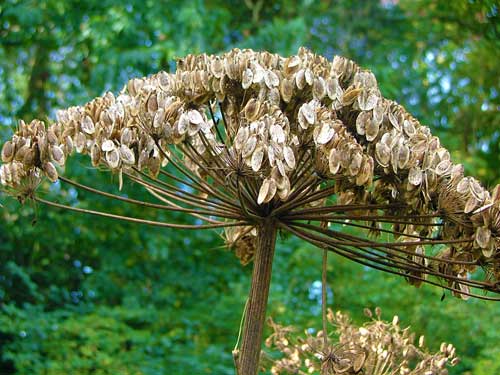 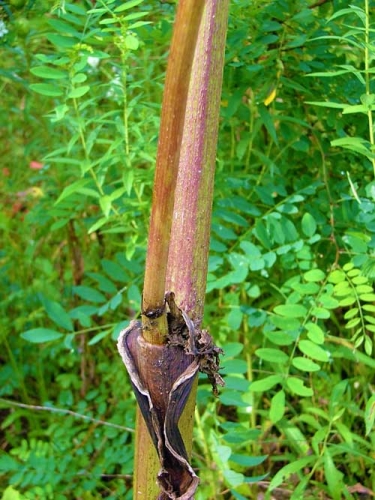 Proper identification will go a long way to alleviate worry about exposure and removal. (A good, pictorial description can be found in the Michigan State University Extension bulletin E-2935, “Giant Hogweed: An attractive but dangerous federal noxious weed.”) If you are concerned about a particular plant, send a high quality digital image to MSU Diagnostic Services at pestid@msu.edu for identification. To see common look-alikes that are often misaken for giant hogweed, see "“Common plants are being mistaken for giant hogweed” and "Pokeweed and giant ragweed: Common look-alikes to giant hogweed."

People are encouraged not to touch or try to remove giant hogweed without proper protection (gloves, long sleeves, long pants and safety glasses). MDARD recommends never touching the plant with your bare hands and keep in mind that the sap can persist on mowers, string trimmers, tools and gloves. If you think you have come into contact with hogweed, or any of its relatives mentioned above, you should wash the area with soapy water immediately and keep the affected area away from sunlight for 48 hours.  Wash clothing and tools in hot water and detergent before using again.

Small seedlings can be controlled with a labeled herbicide containing glyphosate, but most references state that a mature giant hogweed plant will not succumb to a single application. Controlling with an herbicide will require tenacious attention, reapplication to basal sprouts and a keen eye for germinating seedlings. (Seeds can remain in the soil and germinate over several seasons.) Once the plant appears dead, it should be removed using a spade and proper personal protection as stated above.