How to recognize symptoms of blueberry shock and scorch: Two new virus diseases found in Michigan

As a long-established blueberry growing region, Michigan has had it share of virus diseases, such as shoestring, necrotic ringspot, leaf mottle, etc. Recently, two new blueberry viruses were found in Michigan. The diseases they cause are not new since they are present in other growing regions such as the Pacific Northwest, but they are new to Michigan. Fortunately, the infections appear localized and efforts are underway to eradicate them to protect the Michigan blueberry industry. Symptoms of blueberry shock and blueberry scorch can be quite dramatic but are also easy to confuse with Phomopsis or mummy berry. It is important to be able to recognize the symptoms for monitoring and in case of future outbreaks.

Shock is caused by blueberry shock virus (BlShV) and is common in Oregon, Washington, and British Columbia. Symptoms are very similar to those of scorch, i.e., sudden, complete flower and leaf necrosis during the bloom period. However, unlike scorch, a second flush of foliage occurs and the plants appear quite normal later in the season except for the lack of fruit. Infected bushes often exhibit symptoms for one to four years and then become symptomless. In the Pacific Northwest, the bushes eventually recover and a good crop is possible in well-managed fields. However, we cannot assume that this will be the case in a northern climate. Blueberry shock virus is dispersed by infected pollen carried by bees and spreads rapidly in a field. Infection only occurs during the bloom period. Symptomless infected plants remain a source of virus. All tested cultivars are susceptible.

Scorch, caused by the blueberry scorch virus (BlScV) is a serious disease in the Pacific Northwest (Oregon, Washington, and British Columbia) and New Jersey, where it is also known as Sheep Pen Hill disease. Scorch has also been found more recently in blueberries in Massachusetts and Connecticut. Sudden death and complete necrosis of flowers and leaves occurs. Twigs may die back up to 10 cm (4 in.). Scorched blossoms are often retained throughout the summer and may resemble spring frost injury, Phomopsis or Botrytis blight. Bushes will die in three to five years after first showing symptoms. Some cultivars (e.g., Stanley) also show marginal leaf chlorosis. In Sheep Pen Hill disease, leaves may show a red line pattern in the fall. Severe infections can kill the bush. The New Jersey strain causes symptoms in all cultivars except Jersey and apparently Legacy, whereas the West Coast strain is symptomless in Bluecrop and Duke amongst other cultivars. Pale green leaves may be the only symptoms in Bluecrop and Legacy plants. Blueberry scorch virus is transmitted by infected cuttings and aphids. Once a plant is infected, symptoms may take one to two years to develop. The disease spreads quickly in a radial pattern and eventually all bushes in a field may become infected. The virus spreads readily to neighboring fields but usually not more than 1 km (0.6 miles).

Virus diseases are often introduced into new areas through infected planting material. Buying virus-free planting stock is the primary preventive measure for virus disease control. It is particularly important not to import planting material from areas where shock and scorch virus are known to occur, unless it has been virus tested. In 2002, the Michigan Department of Agriculture (MDA) established a quarantine for blueberry planting material to prevent the introduction into Michigan of blueberry scorch virus (BlScV), blueberry shock virus (BlShV), and Sheep Pen Hill virus (a strain of blueberry scorch virus designated as BlScV-NJ). MDA quarantine regulations stipulate that no plants, buds, vegetative cuttings or any other blueberry planting material should be brought into Michigan from regulated areas (BC, WA, OR, NJ, MA, CT) unless it has been certified to be virus-free by a virus-free certification program recognized by MDA. Planting material shipped into Michigan must be accompanied by a State Phytosanitary Certificate or Certificate of Quarantine Compliance, indicating its point of original propagation or production and labeled or stamped to show compliance with the terms of this quarantine. Violations of the quarantine regulations can lead to fines and destruction of uncertified or virus-infected plant material as well as revocation of the special permit to ship to Michigan. 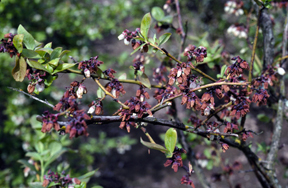 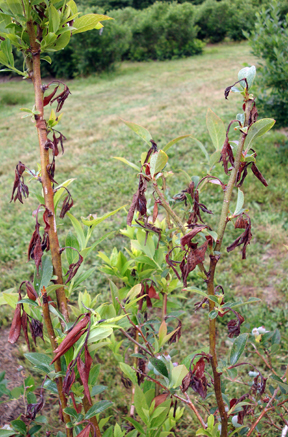 Simultaneous blighting of many shoots on
blueberry shock virus-infected bush.