Spruce needle rust is easily identified by pale, whitish-to-orange blisters that appear on infected needles in the summer.

Rust fungi represent some of the most advanced fungal species known. Because rusts are complex diseases, they can be described in many different ways. You can categorize them by their life cycles, spore colors, primary or alternate hosts, or the types of symptoms they cause. Using both symptoms and the conifer host is probably your best bet in identifying the rust diseases of Christmas trees in Michigan.

Typical needle rusts we find in Michigan are:

Spruce needle rust (Chrysomyxa spp.) may be showing up in Christmas tree fields and landscapes. In July and August, yellow needles with whitish blisters filled with yellow-to-orange spores will appear on the current-year’s growth of Colorado blue, black and white spruce.

Spruce needle rust needs an alternate host to complete its lifecycle. The rust fungus overwinters on heathy plants such as Labrador tea and leather leaf. In the spring, spores from these alternate hosts infect the young spruce needles via wind and rain events. The infected needles develop the whitish blister that will release orange, powdery spores. These spores can only infect the alternate host plant and do not reinfect the spruce. Spruce needles that were infected will shed this fall and may leave heavily infected trees unfit for sale.

The alternate hosts, Labrador tea and leather leaf, are found in bogs and damp thickets. Care should be taken to plant spruce away from wetlands, especially the rust susceptible Colorado blue and white spruce. Norway spruce is more resistant. Scouting for alternate hosts, rouging infected branches and trees and planting resistant stock can reduce the impact of many of these rust diseases. 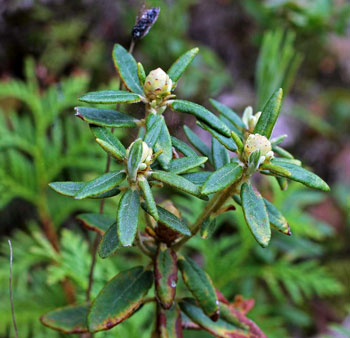 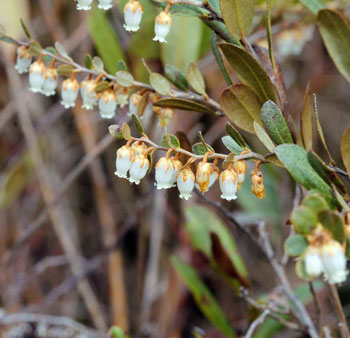