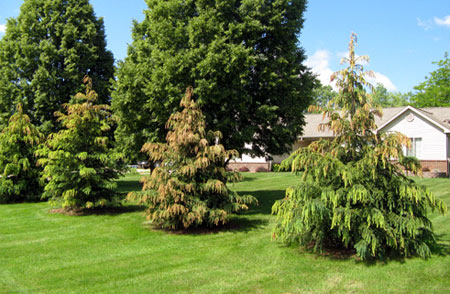 The active ingredient in Imprelis, aminocyclopyrachlor, is highly effective on many difficult to control turf weeds such as ground ivy since, unlike most common turf weed killers, the compound is actively taken up by roots. While this property helped Imprelis take out tough weeds, it also resulted in severe damage and death to trees, especially Norway spruce and eastern white pine trees.

Following initial reports of damage by university extension services and media, including the Detroit FreePress and New York Times, the U.S. Environmental Protection Agency issued a stop-sale order for Imprelis in July. After the product was pulled from the market, DuPont established a claims process for affected property owners and received over 30,000 damage claims. Total damage estimates range in the hundreds of millions of dollars. Although Imprelis was only applied for a very short window of time in fall 2010 and spring 2011, Michigan State University Extension continues to receive inquiries from homeowners and others concerned about possible Imprelis exposure and related issues. Here are some of the key outstanding issues.

Predicting the ability of trees to recover from herbicide exposure is difficult even when dealing with well-known compounds: the amount and timing of exposure, tree condition, soil factors and weather before and after exposure all act and interact to determine the tree’s response. With Imprelis, this inexact equation was further complicated since there were no published studies available on the compound’s effect on trees. In many cases, Imprelis killed trees outright; in others, trees were so severely damaged they obviously needed to be removed. Developing a prognosis for trees with minor damage has been difficult and, in some instances, trees that did not show symptoms of damage in 2011 showed abnormal growth in 2012 and growth anomalies continue to appear.

For example, MSU Extension educator Beth Clawson received images from a homeowner this spring that showed club-like callus formation on terminal shoots of a pine exposed to Imprelis (Photos 2-3). The prospect of tree recovery was further complicated by extreme weather events in 2012. In the upper Midwest, where the greater number of Imprelis damage cases occurred, warm early spring weather in 2012 was followed by a series of frosts resulting in late frost damage to many trees. This was followed by a record-setting July heat wave and severe drought in much of the region, adding further stress to trees struggling to recover from Imprelis exposure. Although it is difficult to say with certainty, it seems reasonable to assume that weather extremes in 2012 prolonged the recovery time needed for many Imprelis-affected trees. 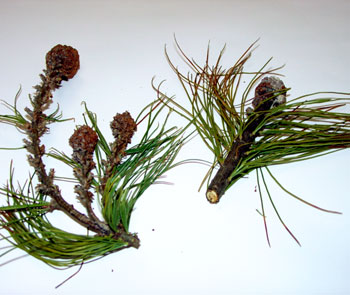 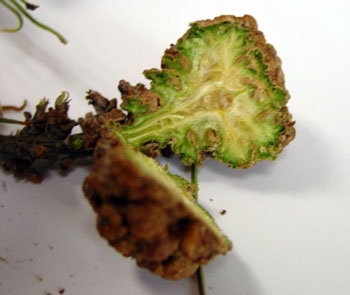 Based on published information, Imprelis in soil has a half-life (time for concentration to decrease by one-half) of 35 to 100 days. If we assume the slowest decay rate (100 days), that means we are roughly seven half-lives out from most Imprelis applications two years ago. Therefore, current soil concentrations should be less than 1/100th the initial concentration. (For you math purists out there, the calculation is 1 divided by 2 to the 7th power.)

The Indiana Office of the State Chemist tested soil from Imprelis-treated sites in 2011, 2012 and 2013 and the concentrations have generally followed this decay. In 2013, they did not find detectable amounts of Imprelis in six out of 11 samples and in the other five, Imprelis was detectable but not quantifiable, indicating levels were extremely low.

While Imprelis levels in soil have largely dissipated, Imprelis in tree tissues appears to be breaking down much more slowly. Gail Ruhl, senior plant diagnostician at Purdue University, reports their group was able to find Imprelis residues from in leachate from container-grown tomato plants that were mulched with ground branches from Imprelis-affected trees. The tomato plants also showed signs of abnormal growth. This information is important as Imprelis-related tree removals continue. Waste material from Imprelis-affected trees should be burned or landfilled, but not mulched.

DuPont’s claims settlement process has been a source of frustration for many homeowners and others with trees that were damaged or killed. As one would expect in a process involving 30,000 claims in dozens of states, claims settlement has been complex and fraught with delays. Claims were settled based on the extent of damage and the size of the tree affected. Property owners received up to $7,000 for trees 40 feet or taller that were killed or damaged to the point that removal was required. Owners of trees that were damaged but not removed are eligible for a tree service package to restoration.