“Inside-outside” insects are showing up in homes now

Six-legged house guests are suddenly appearing in many homes. What are they and how do you get rid of them?

Michigan State University Extension horticulture educators and Master Gardener hotlines are receiving phone calls from people surprised or annoyed to have a number of little six-legged critters wandering around their homes. It may seem too early or cold for insect activity, but these are overwintering insects that are waking from dormancy and being found indoors on windowsills or walking on walls. They may also be found sitting quietly outdoors on the siding of the house, especially on the south and west sides. Where they come from and what they are doing concerns many people.

Basically, these insects have all been “in.” How far in depends if they were under wall insulation, in cracks around window casings or in the wall void. When the area where they are hibernating warms above 50 degrees, it appears spring has come. Often, they make a wrong turn and end up indoors. They are not feeding on anything or damaging the house. They are just wandering around.

Getting rid of these unwelcomed little guests can be accomplished by sucking them up with a vacuum cleaner. This is better than swatting them and having their little broken bodies staining lamp shades or curtains. Spraying pesticides is often ineffective because they do not do an effective job of killing semi-dormant insects. Here’s the short list of who has been using your house as “Motel Six-Legged.”

These China natives overwinter in cliff faces where they are from. Imagine the disappointment when they got to Michigan. However, buildings with cracks and openings will have to stand in for winter hangouts. If handled roughly, these colorful insects can leak an orange-colored liquid from leg joints called “reflex bleeding.” It causes them to smell like burning plastic. If they are being “Hoovered up,” it can cause the person running the vacuum cleaner to think there is a vacuum motor problem.

These dark gray bugs with the red pin-striping are associated with boxelder trees where they will gather in the fall. The juvenile boxelder bugs are red and do not store enough energy to make it through the winter hibernation. Later in the spring, a new generation of red boxelder bug kiddies will be enjoying sunning themselves on mulch and rocks. These guys stain if punched or slapped. 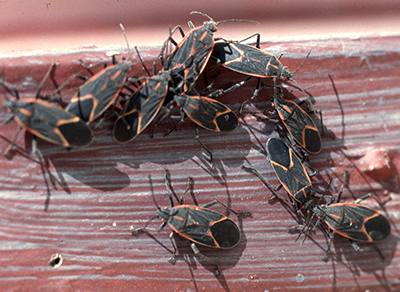 If the house has evergreens around it that are old enough to have cones, this insect may be found indoors in the fall. During the summer, they feed on the gooey goodness on the inside of pine seeds, but do not damage the trees. They are easy to identify by looking at the lower part of the hind legs. The legs have a wide, flattened portion that is very characteristic. 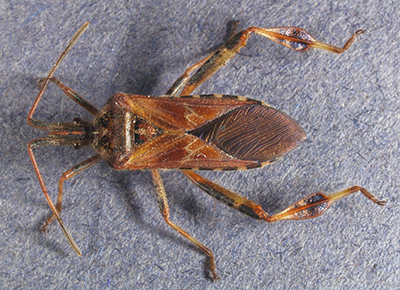 This insect is found sporadically indoors around Michigan. Outside it causes damage to fruits and vegetables. It overwinters as an adult and if it is handled roughly, gives off a very unpleasant smell. The western conifer seed bug is often mistaken for this insect, but check the lower hind legs; brown marmorated stink bugs have skinny legs while western conifer seed bugs have flat legs. 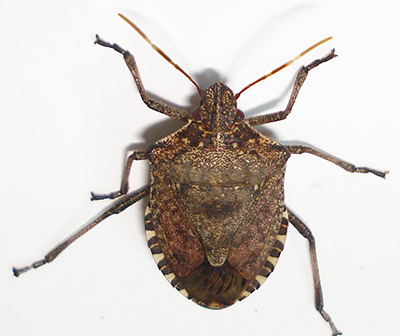 These large, black, hairy flies are found in numbers indoors. They are not associated with unsanitary conditions, just a wall void they were able to access. Outside the juveniles are parasites of earthworms. The adult flies feed on pollen from flowers and wait for fall and that warm south- or west-facing wall. 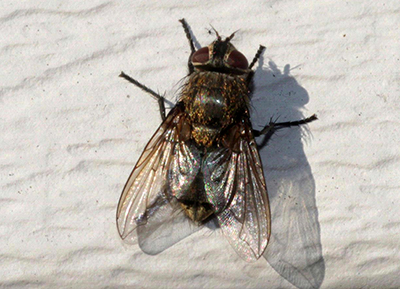