Farmers should determine the economic advantage of increasing inputs in wheat.

Wheat yields in Michigan continue to increase, setting three new state records in the past five years. Michigan wheat farmers achieved a state average 89 bushels per acre in 2016. So how are they achieving higher yields? It boils down to management and conducive weather.

To assess management strategies of varying intensity, Michigan State University Extension educators Martin Nagelkirk, James DeDecker and Dennis Pennington collaborated with wheat growers on a series of on-farm research trials. The purpose of these trials was to evaluate a series of currently available management systems with successively greater intensity and input cost. Our hypothesis was that yield and profitability would increase significantly with greater management intensity.

There were large differences in baseline yield potential and response to treatments between locations, with some showing not statistical difference between treatment means (Rogers City and Woodbury). The table below shows each location, treatment mean yields and the letter separation for means. At any given location, treatments with the same letter are not different from each other. Yield of treatments 2 and 3 at Hillman, 3 at Kingston, 3 and 4 at Elkton and 2 at Adrian were significantly different than the baseline management system (treatment 1). Two sites (Hillman and Adrian) apparently had enough fungal disease pressure to warrant a late fungicide application. Three sites (Hillman, Kingston and Elkton) were responsive to additional nitrogen fertilizer.

At all sites, dry weather limited head scab and leaf disease pressure, which likely reduced yield responses to late-season fungicide applications. There were hot spots of stripe rust on susceptible varieties in the study, but overall fungal disease levels in 2016 were lower than usual. At Woodbury and Rogers City, dry weather also contributed to moisture stress, which likely further limited yield response to additional inputs—there were no statistical differences between treatments. At Rogers City, moisture stress was compounded by sulfur and boron deficiencies. At the Kingston and Elton sites, responses were more typical of what is often seen in higher yielding environments. That is, yields responded favorably to elevated rates of nitrogen.

Palisade, the plant growth regulator applied in this study, is used to reduce lodging by limiting stem elongation. None of our trial sites or treatments had significant lodging this year, despite the higher nitrogen rates in treatments 3 and 4. Yield of the Palisade treatment was only significantly different from the control at one site (Elkton), where an interaction with the increased nitrogen rate in this treatment appeared to be more important (treatments 3 and 4 different from 1, but not one another). 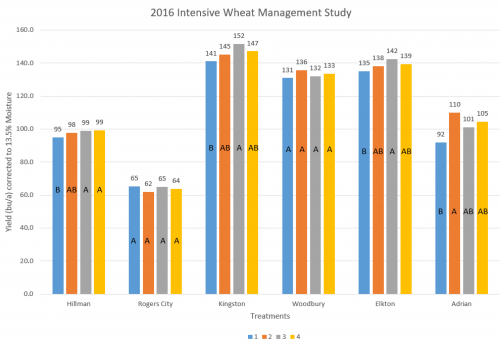 With wheat at approximately $5 per bushel during harvest in 2016, growers needed to increase yields by 4-5 bushels per acre to break even on each additional input of fungicide, nitrogen or the growth regular. Only treatments 3 at Kingston and 2 at Adrian achieved yields that were significantly different from the baseline system (treatment 1) and also economically profitable. If inputs can be procured at lower cost, applications costs reduced or under different (wetter) weather conditions more conducive to growth and fungal disease, the profitability of these more input-intensive scenarios could increase.