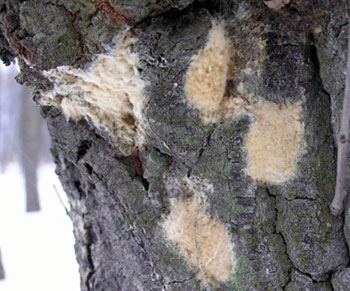 A winter’s walk through woods, parks and landscapes in Michigan can provide clues on potential pest problems for next year. Areas where populations of gypsy moth were high last summer are likely to contain many of their buff-colored egg masses. Some locations across the state were attacked by larger populations of gypsy moth caterpillars than had occurred in over a decade. Tree defoliation was reported in Livingston and Washtenaw counties in Southern Michigan and in Crawford, Otsego, Roscommon and Montmorency counties in Northern Lower Michigan.

Gypsy moth populations tend to be cyclical, but this recent burst in population may be related to the drought conditions in late spring to mid-summer in 2012. Drought conditions across Michigan in 2012 restricted the development of the fungus Entomophaga maimaiga, a pathogen of gypsy moths. With the impact from E. maimaiga reduced due to drought, more caterpillars survived to become adult moths to lay eggs, resulting in larger populations to feed on trees last summer.

Fortunately along with the increased levels of gypsy moth caterpillars in 2013, moist, humid weather spurred the growth of the fungal pathogen E. maimaiga. The higher levels of the fungus caused a crash in the gypsy moth population across Livingston and Washtenaw counties, leaving thousands of dead, withered-looking caterpillars hanging head down on trunks of trees. With thousands dead, there was a much smaller quantity that pupated into moths to lay eggs last summer. The dried out carcasses filled with the Entomophaga maimaiga fungal spores eventually fell apart, releasing the spores down into the soil, surviving the winter and waiting to become active again in moist spring conditions. Other areas in the northern part of the state did not have the rainfall and humidity needed for the development of the fungus last summer and in those areas populations did not crash.

This winter, take time to observe tree trunks, undersides of large branches and behind loose bark for gypsy moth egg masses. Oaks, pines, spruces, poplars and black cherry trees are all places where the moths commonly will lay eggs. Eggs may also be laid on houses, outdoor furniture and any outdoor structure. When practical, eggs can be knocked off into a soapy water solution and left in this solution for a couple days to destroy them. Each egg mass can contain from 50 to over 1,000 eggs each. It is worth your while to go and search for egg masses and destroy them before they hatch in the spring.

Will populations of gypsy moth be high again in 2014? Gypsy moths can be found across the state every year, but will commonly be found in low populations. Get out and explore your woods, parks and landscapes for egg masses. One clue on the health of the gypsy moth population is the size of the egg masses.

The fuzzy, buff-colored egg masses (color becomes pale through the winter) that are the size of a quarter or larger indicate a growing, healthy population. Smaller egg masses that are the size of a dime are an indicator of a stressed population that is on the decline. Remove the egg masses wherever they are found and can be reached. If removal is not an option, it is still good to get an idea of what is actually present. If a number of egg masses are found on evergreens such as pines and spruces, remove what you can and mark these trees to observe for hatching of the caterpillars in the spring. Observations now can help determine if management options are necessary once caterpillars hatch in the spring.

If you are unsure whether you have gypsy moths and would like further information, contact the Michigan State University Extension Garden and Landscape hotline at 888-678-3464.

MSU’s Enviroweather website provides an online resource that displays the hatch of gypsy moth caterpillars in the spring as it progress across the state. The predicted hatch is based on spring temperature conditions. Utilize this site to help predict when the caterpillars will become active in your area.