It’s that time of year for orange rust in brambles

This is a good time to check blackberry and black raspberry plantings for orange rust. Wild blackberries may also display symptoms but red raspberries are immune.

Characteristic symptoms are spindly shoots with clustered, misshapen, pale green to yellowish leaves. The leaves are covered with bright orange, powdery blisters on the underside which gives the disease its name “orange rust”.

Before the blisters burst open, they look waxy or shiny as if covered with lacquer. On black raspberries, the rusted leaves start to wither and drop in late spring to early summer. New leaves produced towards the tips of canes may appear normal, giving the impression that the plant has “grown out” of the disease. However, such canes will remain infected and will produce a mass of spindly shoots with no blossoms the following spring. The plant becomes systemically infected and remains so for the rest of its life. The infected plants may give a bushy appearance since many short, upright shoots arise from one bud.

Orange rust does not usually kill plants, but it can significantly reduce vegetative growth and yield. The disease is caused by the fungus Gymnoconia nitens. The orange spores are spread by wind and infect leaves of healthy plants during long periods of leaf wetness provided by rain or dew. Orange rust is favored by relatively low temperatures (50-70 degrees Fahrenheit) and wet conditions. The fungus is systemic and overwinters in the crown and roots of infected plants, leading to the production of new infected canes every year. Without management, the number of infected plants in a field may increase from year to year until most plants are infected.

While there were no chemical control options for this disease in the past, we now have several excellent systemic fungicide options. This does not mean that we should abandon cultural practices such as establishing new plantings from disease-free nursery stock and removing diseased plants to lower inoculum levels. If any plants show signs of the disease during the spring in which they were planted, this means there were already infected at the time of planting. 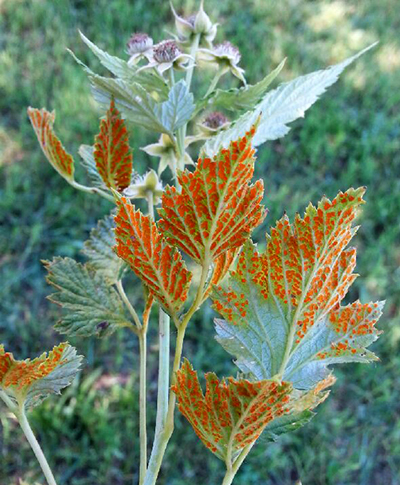 Upon inspection of plants each spring, any infected plants, which will not recover and are economically worthless, should be dug up and destroyed promptly before rust pustules mature and spores are liberated. The location of those plants should be clearly marked, and any new suckers arising from root pieces left in the ground should be removed and sprayed with an approved systemic herbicide. It is also prudent to remove all infected wild blackberries in nearby wooded areas and fence rows that might serve as an inoculum source. Management practices that improve air circulation, such as thinning out canes within the row, pruning out floricanes immediately after harvest, and effective weed control aid in disease control by reducing build-up of moisture in the planting. Some blackberry cultivars (e.g., Eldorado, Raven, and Ebony King) are reported to be resistant to orange rust, but no black raspberry cultivars are known to be resistant.

The best fungicide options are Rally (myclobutanil) and Tilt (propiconazole). Abound (azoxystrobin) and Quilt Xcel (propiconazole + azoxystrobin) have blackberry rust on the label but orange rust is not listed specifically. Pristine (pyraclostrobin + boscalid), and Cabrio (pyraclostrobin) list “suppression” of orange rust on their labels. Each of the above-mentioned fungicides will also control various other cane, leaf and fruit diseases.

Michigan State University Extension recommends fungicides should be applied when the orange pustules are first seen, preferably before they burst open and release spores. Infected plants can be spotted by their poor growth and spindly stature. None of these fungicides will cure an already infected plant but they can protect healthy plants from becoming infected. Since infected plants will continue to be sources of inoculum over their lifetime, it is best to remove and destroy them altogether and replace them with healthy plant material from a reputable nursery. If the field has a history of orange rust, sprays should be initiated before blisters appear. Since infections can also originate from wild brambles near the field, one should keep an eye on these as well, if possible.