Our unusually warm early spring and rapid accumulation of growing degree days set the stage for widespread late frost damage as temperatures dipped well below freezing in many locations in the Lower Peninsula on May 10 and May 11 (see Figure 1). Note that damage associated with freezing temperatures is referred to as “late frost” or “late freeze” injury because it occurs late in the plant’s hardening-dehardening cycle.

Year in and year out, late frost damage is one of the most common environmentally-caused plant problems we deal with in Michigan. Even without our early warm-up, temperatures in the 20’s during the second week of May would have caused some damage to many plants. For most nursery and landscape plants the principle symptom we’ve seen is browning or die-back of newly emerged shoots and leaves (see photos). In many cases lows hovered just around the critical temperatures to cause damage. This evidenced by “frost lines” where cold air settled in frost pockets, and the lower parts of trees were damage but the upper parts weren’t. Homeowners or landscapers may also observe that exposed plants were damaged, but similar plants closer to buildings or protected areas were not.

The significance of the damage depends on several factors. Most hardwood trees and shrubs that experienced browning leaves or shoots can usually grow through the damage. Browning of flowers on ornamentals, such as magnolias, means the show’s over for the year, but the impact is not long-term. Die-back on shoots of landscape conifers and Christmas trees can be a little more problematic, especially if the trees are intended for sale soon. The trees will not re-flush until they have had a chance to set new buds for the next year. 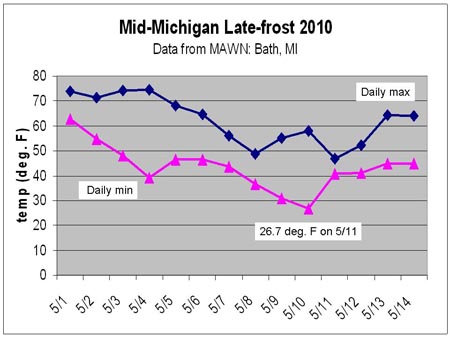