Two relatively uncommon diseases of apples, lenticel infection and bitter rot, show up in the stressful weather conditions of 2012 in Michigan.

The hot and dry weather conditions during 2012 have not only reduced crops in Michigan, but caused somewhat uncommon diseases to occur when trees are under these stresses. One type of disease that has shown up on apples this season appears as numerous small, dark spots, arranged somewhat uniformly on the skin surface. Initially, the spots are quite shallow, but over time they often become wider and deeper into the fruit. These infections are more common on the side of the fruit receiving direct sunlight. Isolations from these tissues show a range of fungi such as Cladosporiumand Alternaria; all of these fungi are generally considered to be weak.

We hypothesize that the combined heat and sunlight weakened the lenticels of the skin, allowing the weak pathogens to colonize the area. Lenticels can also be weakened by an extended dry period followed by rain, a situation that will also cause peach skin to split. Lenticels that "split" appear as enlarged and roughened lenticels on fruit at harvest. 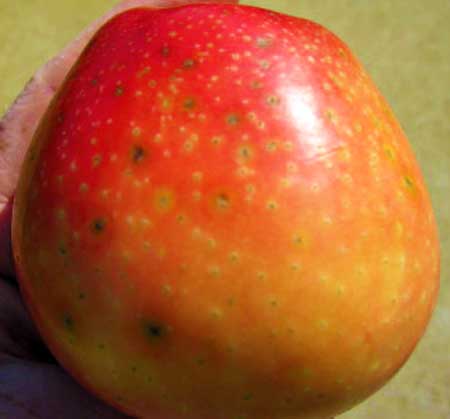 Bitter rot, caused by the closely related fungi Colletotricum gloeosporiodes and Colletotrichum acutatum, can also show up in hot years. Although bitter rot is well known in warmer, humid apple growing regions such as the southeast United States, the disease is rare in Michigan. The symptoms are more common on light or bicolored fruit such as Empire, Mclntosh, Sunrise, Paulared and Jonagold. Bitter rot spots usually appear on the side of the apple directly exposed to the sun. Lesions are light to dark brown, flattened, and may have a pink, slight orange to light tan mass of spores. 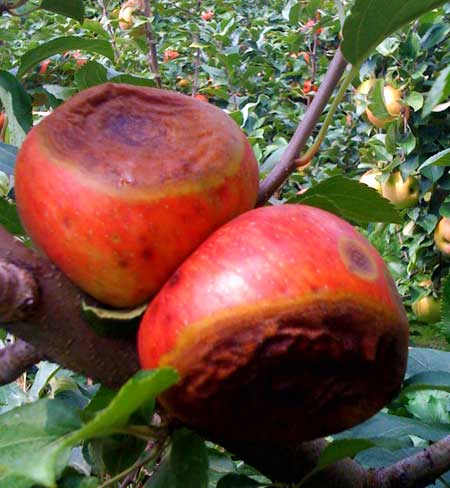 Bitter rot symptoms of apple fruit. Flattened and concentric lesions
are characteristic of this disease.

Captan or Flint during late July and August are effective for controlling bitter rot. Topsin M is not effective for bitter rot control. The disease overwinters in dead limbs and mummified fruit. If bitter rot reoccurs in an apple block, more thorough dormant pruning is recommended. Large diameter wood from pruning should be removed from the orchard to minimize the spread of the disease.