Because of its ability to survive the winter, cereal rye fits easily into most vegetable rotation systems. It can be sown relatively late in the fall when most vegetable crops are harvested. After the winter season, it grows quickly in late spring when temperatures become warmer. During the rapid growth stage, large amounts of biomass are accumulated. While biomass accumulation is desired to build soil organic matter and soil quality, it is important to remember that this may cause nutrient tie up in the cover crop residue if the cover crop is not managed adequately. Also, rye produces chemicals known as allelochemicals that have been shown to injure vegetable crops, including species established from transplants if residues are not managed properly. The process known as allelopathy is well documented. In commercial field, it is usually difficult to document the allelopathic effects of rye because there are no control plots (with no cover crop) to use for comparison. However, in years with excellent rye stand, there are always complaints of poor crop germination and stand establishment. Crop injury is generally more important if rainfall is not adequate after rye residue incorporation. Crop injury from rye allelochemicals can easily be misdiagnosed as herbicide carryover, frost damage, and even diseases. Here are a few management tips that can help reduce the potential for crop injury and improve benefits from a rye cover crop.

Kill rye cover crop when it is still tender

Experienced growers would tell you that it is better to kill rye before it reaches your knees. Indeed the cover crop should be killed at the vegetative stage when the tissue is still tender. The ideal stage would be at jointing during the initial phase of stem elongation but before the flag leaf stage. When rye reaches boot stage, it becomes difficult to kill, the residue breaks down much slower due to high C/N ratio, and there is greater potential for nutrient, especially nitrogen, tie up. If for some reason a rye cover crop gets out of control, consider mowing it to speed up tissue break down.

Incorporate fresh residue into the soil

Incorporating fresh residue into the soil will enhance the population of soil microorganisms that help break down the residues and release nutrients for the following cash crop. When residue is allowed to dry on the soil surface, as is the case for most herbicide-killed cover crops, subsequent residue break down becomes slower.

Studies with many cover crops have shown that a period of about two weeks between fresh residue incorporation and crop planting is necessary to improve nitrogen availability to the following crop. This also reduces the risk of crop injury from allelochemicals released by the decomposing residue. Due to the high C/N ratio in rye, a longer period between cover crop kill and crop planting is mandated. This period will depend on the stage when rye was killed since younger tissue breaks down faster than mature tissue. Growers should be particularly careful when they are sowing small seeded vegetable crops. Chemicals released from the decomposing rye residue may lead to poor crop stand especially when rainfall is not adequate to leach the chemicals.

In most vegetable production systems, benefits of rye cover crop are optimized when it is killed at a tender (vegetative) stage, incorporated into the soil as green manure, allowed enough time for residue breakdown before planting and when rainfall/irrigation is adequate. 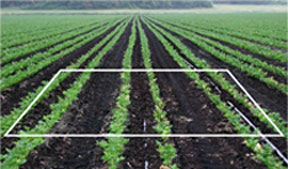