As much of the state is harvesting or about to start tart cherry harvest, Michigan State University Extension has reminders about the best management practices for controlling spotted wing Drosophila (SWD) at this critical time of year. There are several considerations including SWD biology, population size and spray program efficacy that impact management decisions.

Current trapping data indicate SWD populations are building faster this season compared with past years in all cherry growing regions of Michigan. SWD adults were active and caught in traps earlier in 2017 than in past seasons and as soon as suitable hosts are available, SWD are able to reproduce and potentially contribute to high SWD pressure. To minimize the risk of infested fruit at harvest, you need to be actively managing SWD with the most effective spray programs to achieve optimal control this season.

First, choose the most efficacious insecticides to control SWD. This statement cannot be understated as SWD control becomes increasingly challenging as the SWD population builds. In efficacy trials conducted at the Northwest Michigan Horticulture Research Center and the Trevor Nichols Research Center, data have shown that even the best insecticide programs cannot prevent SWD infestation under extremely high pressure. These data suggest growers need to be on top of SWD management programs to prevent and delay the exponential SWD population growth—as populations increase, insecticide efficacy and control decreases.

SWD management programs should begin when traps in a particular region start to catch SWD and fruit are susceptible. The statewide SWD trap line can be found at MSU’s Spotted Wing Drosophila website. The Northwest Michigan Horticulture Research Center also puts out a daily SWD trap count through the northwest region’s FruitNet newsletter. These 200-plus traps are specific to northwest Michigan.

SWD females oviposit eggs into susceptible hosts. From no choice tests conducted at the Trevor Nichols Research Center and Northwest Michigan Horticulture Research Center, we found that cherry fruit are susceptible to SWD egglaying as soon as the cherry loses its green color. We have repeated host susceptibility trials at the Northwest Michigan Horticulture Research Center this season, and preliminary data suggests female flies will lay eggs in underripe fruit if provided no other choice. However, if given a choice of different fruits, female flies prefer ripe fruit.

These results suggest that although SWD can lay eggs in underripe fruit, female flies will seek out riper fruit in a given area. Therefore, be sure to cover the ripest fruit/variety/block on the farm first. We will have more information on SWD host preference upon the conclusion of this 2017 study. For now, assume that all cherries are susceptible to SWD infestation throughout the state.

Our annual SWD efficacy trials provide the ratings used in MSU Extension’s “Michigan Fruit Management Guide” (bulletin E0154), and these ratings are updated according to the most recent efficacy results. The ratings used are excellent, good, fair and poor. Although these terms seem somewhat general and perhaps a bit subjective, they are relative terms.

The rating for each product is established as a result of how insecticides perform compared with the other products in the trials, and how well they limit SWD infestation. For instance, insecticides that have an excellent rating have provided the best and most consistent control of the pest compared with the other insecticides. These ratings are a way to rank the efficaciousness of the different materials. They likely reflect differences in factors like the toxicity of the compound, residual longevity, rainfastness and others, but we have not directly measured differences in these factors.

For the most recent SWD efficacy trials conducted in 2016, seven insecticides had an excellent rating in the E0154 bulletin: Exirel, Apta, Imidan, Danitol, Entrust, Warrior II and Mustang Max. However, based on the 2015 efficacy trial conducted at the Northwest Michigan Horticulture Research Center, we found that the insecticide Apta was not as effective in controlling SWD under high pressure (Figure 1). 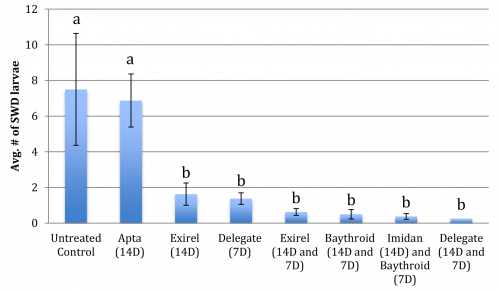 From the 2016 Northwest Michigan Horticulture Research Center efficacy trial, we found we had similar control of SWD with the selected programs shown in Figure 2. All of the programs below provided significantly better control than the untreated check. Of these efficacy programs, the combination of Imidan at 14 days and Warrior at seven days provided the best control of SWD control, but note that an application of Warrior at seven days is not a legal application and was used for research purposes only. Warrior has a 14-day pre-harvest interval (PHI). 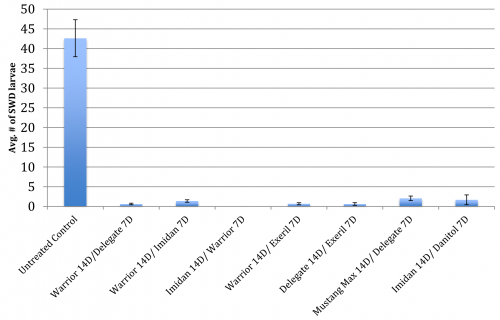 We have conducted numerous trials at the Trevor Nichols Research Center over the past three years to evaluate the efficacy of insecticides for SWD control. Products tested have included Exirel, Imidan, Apta, Delegate, Grandevo and Movento. In single or two-tree replicated trials, Imidan, Exirel and a yet to be registered material, Harvanta, have provided the best control. All other compounds have been less consistent and not as effective as Imidan or Exirel. We have not tested many of the pyrethroid compounds. Our efficacy ratings for the pyrethroids are based on the consensus of researchers across the country that have conducted SWD efficacy trials.

Based on all the information we have gathered thus far, the following compounds are rated excellent and provide the best opportunity for preventing SWD infestation in cherries: Danitol and Exirel with a three-day PHI (anecdotally, Exeril is likely a better and longer lasting material than Danitol). Imidan with a seven-day PHI, and Warrior and Mustang Max with a 14-day PHI are also excellent materials. Again, Imidan is likely longer-lasting than Warrior and Mustang Max, both pyrethroids that are susceptible to UV degredation. For the 2017 season, Mustang Max has been granted an emergency exemption for a three-day PHI in tart cherry in Michigan.

Of the three products tested, the fewest number of larvae were found in fruit treated with Imidan. The every row sprays of Imidan resulted in the fewest detectable SWD larvae of the four Imidan regimes, and less than five larvae were detected in either the seven-day or 10-day every row application. More larvae were found in alternate row Imidan treated fruit compared with every row Imidan treated fruit at each sampling period. For the entirety of the experiment, less than an average of five larvae were detected in the seven-day alternate row treatment; however, efficacy diminished when the timing was extended out to 10 days, and we detected higher averages of larvae in this treatment compared with the seven-day alternate row treatment at three days and seven days after the last application was made.

The results of this trial demonstrated Imidan provided the best SWD control using either alternate row or every row spray regimes compared with Delegate or Baythroid applied in both alternate and every row spray strategies. Under high SWD pressure, we found the most optimal spray regime of the strategies we investigated was a seven-day every row application with all of the insecticides; the optimal insecticide and regime was an every row spray every seven days with Imidan. Again, under high pressure, we would not recommend stretching Imidan spray intervals to 10 days.

Our results indicate not applying alternate row applications of Baythroid or Delegate or stretch every row applications beyond seven days. It is critical to note that SWD larvae were found in fruit seven days after the final application, which corresponded with harvest timing for all application strategies and insecticides. Again, even with good spray programs, residues of these insecticides may not be adequate after seven days to prevent SWD infestation under high-pressure scenarios. This result reiterates the importance of maintaining excellent coverage of fruit and keeping a tight spray program to ensure fruit do not become infested with SWD.

Additional information we gathered from comparing grower spray records and measuring on-farm fruit infestation has further corroborated the results from SWD efficacy research trials. These observations indicated that pyrethroid insecticides should not be stretched beyond five days in hot and dry years. Do not stretch intervals of any materials, but particularly pyrethroids.

For example, in 2016, we found larvae in fruit of commercial orchards six days after a Danitol application under high SWD pressure. Danitol is rated excellent for SWD, but we hypothesize that efficacy broke down quickly during last season’s hot and dry weather. Grower spray records observations also confirmed the Northwest Michigan Horticulture Research Center’s spray strategy research; we found higher numbers of SWD larvae in orchards that used an alternate row regime, even when insecticides rated excellent were used.

Lastly, try to achieve the best insecticide coverage. This tenant of fruit growing is well known and applied, but SWD seems to be more capable of finding holes in spray coverage than other pests. Likely, as a result of its SWD rapid reproductive power and short generation time, populations rise quickly and challenge even the best management programs. Be sure to properly calibrate the sprayer, slow down to ensure good coverage and make insecticide applications when conditions are calm.

The other common question of 2017 is when to reapply after a rain event. We have conducted rainfastness trials at the Trevor Nichols Research Center in apples, grapes and blueberries (bulletin E0154, page 304), and we can extrapolate that information and apply it to cherries. We are currently conducting rainfastness trials in cherries, and data are forthcoming.

SWD populations will continue to build throughout the season, and our research and observations have indicated the later the harvest timing, the more difficult it is to control this pest—likely as a result of high SWD numbers. We understand the constraints of the harvest season, but removing the crop as quickly as possible is ideal. Also, communicating with processors to understand potential harvest quotas and other potential harvest delays will help growers plan a management strategy that includes rotation of insecticides, PHIs and re-entry intervals (REIs), and season totals for each insecticide.