With more expensive soybean seed, farmers may question just how low a population they can plant to remain profitable. Studies in Michigan’s Thumb help answer that question.

Michigan State University Extension educators who work with the Thumb Ag Research and Education (TARE) project evaluated five soybean seeding populations in 2013. Planted populations ranged from 100,000 seeds per acre to 210,000 seeds per acre in increments of 30,000 seeds. This population study was established at two sites at Elkton, Mich., and Fairgrove, Mich. This study was similar to a series of studies established 2008-2012 by the TARE group when the evaluated populations ranged from 80,000 to 240,000 in increments of 40,000 seeds.

Soybeans were planted in 30-inch rows and the variety used was Rupp 7251 treated with Cruiser, fungicide and an inoculant. Note that the studies were established on high-yielding, well-tiled, loamy ground. Actual plant stands were measured in August. The Fairgrove site was planted on June 3, 2013, and the Elkton site was planted on June 5. Actual populations were about 83 percent and 80 percent of planted populations at the Elkton and Fairgrove sites, respectively. Actual populations more closely matched planted populations at the lower ranges (100,000 and 130,000) at both sites. See the following table for more information.

See the following table for soybean yield at the varying populations. 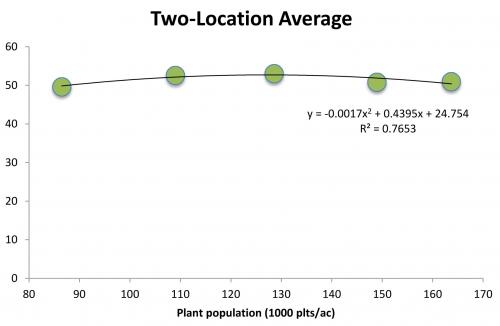 The author gratefully acknowledges the assistance of Bob Nielsen, Professor of Agronomy, Purdue University, for providing the regression analysis, and for his assistance in interpreting these results.