May is National Asparagus Month

Michigan is among the top three producers of asparagus in the United States. Michigan grown asparagus will be available soon. 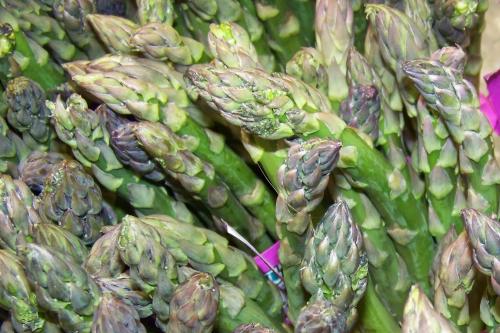 Only California and Washington produce more asparagus than Michigan. Ranking third in the nation, Michigan growers produce 14-20 million pounds of asparagus annually. Oceana County produces much of the state’s crop with areas around Hart and Shelby being the biggest producers. However, there is also substantial production in southwest Michigan between South Haven and Benton Harbor. Harvested from early May through June, the total value of asparagus production in Michigan is estimated to be $13 million.

Asparagus is a member of the lily family and it grows best on well-drained soils. While the crop prefers sand, it will survive any place where water does not stand and which receives a lot of direct sunlight. It is a cool-season perennial crop and after planted it is not harvested for the first two years to allow the crowns to develop strong root systems. A well cared for planting will be productive for 10 years or more. According to Industry statistics, Michigan producers harvested approximately 19 million pounds from 10,300 acres in 2012. Generally, peak yields in asparagus reach 3,500 pounds per acre; however this is changing with new high-yielding varieties such as Millenium, which can yield above this. Roughly 35 percent of the harvest is sold fresh at farmers markets, farm stands and grocery stores and 65 percent is sold to processors who freeze or can the cuts and tips or whole spears.

The Michigan Asparagus Advisory Board’s website has many interesting facts, recipes and answers to commonly asked questions about asparagus. For instance, it indicates that asparagus should be picked, for best results, when it is firm, fresh, and when it has closed, compact tips that are uniform in size.  Consumers should cook trimmed asparagus for 5-8 minutes in boiling water for best results. Growers do not cut the ferns down until late fall when they have turned brown as it is the fern that provides nutrients to the crown so that it will produce next year.

U.S. Recommended Daily Allowances (USRDA) indicates that five spears (5.3 ounces) provide 400 milligrams of potassium, three grams of fiber, 60 percent of the recommended folate and they are excellent sources of thiamin and vitamin B6. They also contain only 20 calories, have no fat or cholesterol and only five milligrams of sodium.

According to Ben Werling, Michigan State University Extension vegetable educator, “prices for both fresh and processed asparagus are excellent this year, with much demand for asparagus in local markets. This bodes well for our West Michigan growers, who are experts at producing healthy, high-quality asparagus. Michigan State University is also home to one of the world’s best developed asparagus research programs, due to a continued partnership between our growers and faculty.” Watch for Michigan grown asparagus at farm stands, farmer’s markets and grocery stores soon.

What a difference a year makes – Michigan produce will be abundant!