Through a Borlaug-Ruan internship, delegates study a food security-related topic alongside renowned researchers at research centers around the world. Barchett described the basics of her assignment.

“My internship was at the International Crops Research Institute for the Semi-Arid Tropics in India, where I worked in the economics department studying how the Indian national sanitation campaigns impacted household nutrition and health,” said Barchett. “While I spent most of my time researching, I used my weekends to explore the area. Birdwatching, tangoing and touring Bollywood were among my weekend activities.”

Barchett spent a week living in a rural village to conduct her internship research. She described that experience as one of her fondest memories. After meeting a disadvantaged family with very little, she was deeply bothered and gave the family a gift of two plates, bringing the family’s total to four plates for meals.

“They were such a hardworking family, but could not even afford simple tableware. When I gave two more plates to their daughter, it was humbling to watch her face light up with joy.” She continued, “Although my action did not solve the family’s greater problem of food insecurity, I do believe I made a difference in a small, meaningful way.”

Though Barchett had traveled abroad before, she described this experience as truly unique, stating, “Hyderabad, my host city, was by no means a tourist town. Seeing Americans was a rarity for most people, as attested by all the selfies they took with me!” 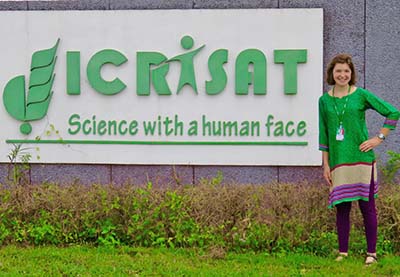 Barchett’s research under Padmaja’s mentorship was on sanitation. “My village research revealed that half of people owned toilets, yet only a quarter used them. Statistics from other Indian studies reflect this finding. Since India has one of the fastest growing global economies while boasting sanitation levels below many other developing nations, it is a paradox in modern development,” said Barchett.

When asked about the role 4-H played in helping her prepare for this experience, Barchett said, “4-H strengthened my public speaking skills immensely, which came in handy when I had to give a one-hour presentation at the end of my internship. Also, 4-H was one of the first places where I actively collaborated with people of different backgrounds. Although I do not always agree with other (4-H) clubbers’ points-of-view, I know it is important to move beyond differences to accomplish greater goals.”

Barchett is an example of one of Michigan’s bright youth who have accepted the challenge of being a change-make, and has gone on to be a Michigan 4-H alumna and hunger fighter in her studies and career aspirations. Her advice to other Michigan youth is, “Never believe that what you do is insignificant. There is a common misconception that change happens through important people and big groups, but that is a lie. Change—real change—begins with the passion of one person, and from there someone can transform a family, a city a community and beyond.”

She emphasizes the importance of reflection and resiliency in the face of failure, stating, “You have the power to make a difference, but know that you will be challenged on your road to success. Personally speaking, I have failed many more times than I succeeded, yet I would not trade my losses for anything. They taught me to improve constantly, to appreciate the little things and above all to just keep going.”

You can learn more about Barchett and her journey to being a Borlaug-Ruan intern by checking out “One Michigan 4-Hers trek to making a global difference” by MSU Extension.

Michigan youth educate others on realities of global hunger and poverty