Michigan 4-H members showed their support for those affected by major hurricanes near the end of August.

Spiraling from a tropical depression to a major hurricane in under 40 hours, Hurricane Harvey quickly became the center of everyone’s attention near the end of August. Its devastating winds and flooding battered the Gulf Coast region of Texas and made Hurricane Harvey the costliest tropical cyclone on record, with almost $200 billion in damage. With millions of Texans in need of supplies, money and aid, Michigan 4-H’ers across the state quickly sprang into action to help the hurricane victims and show their support for those affected.

Across Michigan, more than 40 members of the Michigan 4-H community lent their hands and hearts to help support Texas after Harvey. Many Michigan 4-H members, volunteers and clubs donated directly to the Texas 4-H Foundation, while others carried out service projects to benefit various relief efforts. These efforts included collecting agricultural supplies, household items, nonperishable food, monetary donations and other necessities, and sending them to those in need in the Lone Star State.

Recognizing the detrimental impact that Hurricane Harvey had on Texas agriculture, the Iron County 4-H Sharp Shooters collected nearly 60 pounds of vegetable seeds to help farmers overcome their flood losses. Working together, 11 members and four volunteers of the Sharp Shooter Club solicited the seeds from various businesses and local gardeners, who generously donated to the cause. The seeds were sent to Houston’s Independent School District, where they will benefit the elementary school’s Junior Master Gardener programs.

“Your donation was such a blessing to Houston Independent School District (ISD) Food and Nutrition Services,” said Julia Jarrell, Houston ISD nutrition education dietitian. “The seeds will allow many young people to participate in the program and improve their nutrition by tasting and eating the produce that they grow.”

"It only seemed right to help our Texas 4-H friends in their efforts to help those who were affected by the hurricane,” said Patty Macha, Gratiot County 4-H exchange club leader. “Through the 4-H State Exchange program, we have become family to many in Guadalupe County, and when I read that their 4-H program was taking donations to help those affected by Harvey, I knew that Gratiot County 4-H members and families would want to support them." 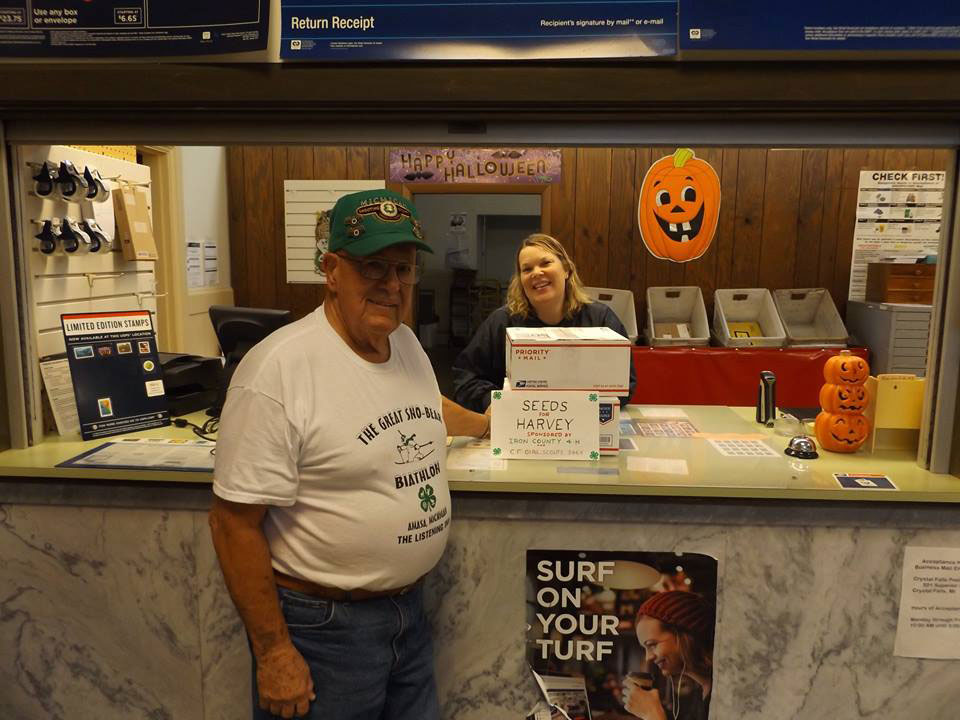 Montcalm County 4-H’ers also worked to raise funds for Hurricane Harvey victims by hosting a bake sale in their community. Thirteen youth, along with their parents and six 4-H volunteers, collectively raised nearly $400 that was donated to the American Red Cross to benefit those affected by the hurricane.

Joining the relief efforts in a slightly different way were Iosco County 4-H’ers, who collected money and household items that families would need replaced after Hurricane Harvey. Seven Iosco County 4-H members filled three vans full of necessities such as clothing, dishes, linens, personal items and non-perishable food. These items, along with $300 raised, were sent to Texas with a local family who was making the trip.

“There were many people who were happy to donate what they did not sell at their garage sales, and many local businesses were willing to give donations to help these families,” said Justine Griffis, 4-H teen leader for Sunrise Side Livestock 4-H Club in Iosco County. “It was a relief that I could help those families affected by the disaster, even though it may have had just a small effect.”

With a very active hurricane season this past fall, Houston was not the only community damaged by natural disasters. Dickinson County 4-H’ers recognized Puerto Rico’s need after Hurricane Maria made landfall and became the worst natural disaster ever recorded to hit the Caribbean island. Working together, the 4-H’ers assembled three large boxes filled with personal and comfort item care kits to help those directly affected by the hurricane.

Michigan 4-H’ers are proud to have been part of the outpouring of support from across the globe for  Texans and Puerto Ricans affected by the devastating effects of hurricanes Harvey and Maria, and  Michigan 4-H’s true leaders continue to pledge their hearts and hands to make the best better and the worst more bearable for those in need.