Hop growers are stringing hopyards around Michigan and preparing to train bines in the coming weeks.

Michigan State University Extension will be tracking hop development during the 2015 season and providing growers with relevant pest management information.

At the Northwest Michigan Horticultural Research Center (NWMHRC), we have accumulated 152 growing degree days base 50 (GDD50) and 255 GDD base 45 (GDD45) with much of the region receiving 0.2-0.6 inches of rainfall over the last few days. Hopyards around northern Michigan are looking clean this spring with early herbicide applications taking effect during the warm weather over the last week.

Many growers mechanically or chemically mowed back the first flush of bines in April and are actively stringing yards at this time; they will begin training bines in the coming weeks. Irrigation systems are up and running and initial fertilizer applications have been made.

At this time, hop plants are between 1-3 feet in height depending on location, variety and pruning practices. Growers are applying fungicides to protect against downy mildew.

Growers should be on the lookout for systemically infected downy mildew spikes as plants emerge. For more management information, refer to the MSU Extension article “Managing hop downy mildew early in the season is critical.” Lady beetle adults, a beneficial predator insect, are present in relatively high numbers. No sign of insect pests at this time. If you’d like to learn more about scouting for hop insect pests, view the free, on-demand Hop IPM webinar at any time by visiting www.ipm.msu.edu. 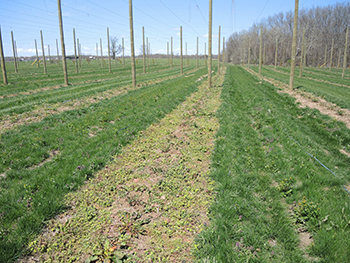 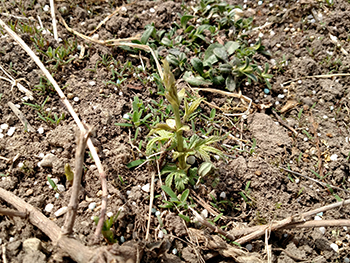 Warmer weather the past two weeks has caused shoot growth to pick up, but rain and long, wet periods have provided perfect conditions for downy mildew infection in new shoot growth. The Berrien Springs Enviro-weather station is currently at 262 GDD50 and the Hickory Corners Enviro-weather station is at 252 GDD50. At Berrien Springs, 1.3 inches of rain has come in the past seven days. Growers who missed covering bines with fungicide or biological protectant during this recent wetting period might consider applying a systemic fungicide with some degree of back action now. Mature hopyards in the area were stringing coir last week as well as this week to prepare for training up bines. New hopyards should focus on the critical weed control necessary to ensure good bine growth in the first year.

Hop bines around the state are knee to hip height, depending on location, with most producers having already hung string in the hopyard to support this year’s bines. GDD accumulation is significantly different along the western portion of the state where the majority of hop acreage is located. So far this season we have accumulated 177 GDD50 in Traverse City, Michigan, and 270 GDD50 in Hickory Corners, Michigan. These differences are reflected in hop development with hop plants in Traverse City, Michigan, between 12 and 24 inches and untrained. In south central and southern Michigan, bines are 36 inches or more and some have been trained. Planting is still underway in northwest Michigan.

The first fertilizer and herbicide applications of the season have already been applied and those with fertigation systems will start spoon-feeding bines in the next couple of weeks. Conventional sites have had good herbicide response with clean weed strips.

Growers will be selecting which bines to train in the coming days and weeks. Keep in mind that the largest bines that emerge on plants (second leaf or older) are not necessarily the best to train. These are referred to as “bull shoots” and have a hollow center, making them more susceptible to wind damage as they are more brittle and less succulent. Most crowns produce two to three bull shoots, which often differ in color, have larger spaces between internodes and are more fibrous than other bines.

The main function of training the bines is to prevent the side branches from tangling and growers should select three to four vigorous vines for training. The remaining vines are pruned back to the crown. Don’t forget, bines must be trained clockwise around the twine. Keep an eye out for a new MSU Extension article on pruning and training bines.

In the coming weeks, growers should be hanging potato leafhopper traps to detect their arrival from overwintering sites in the Gulf States and be on the lookout for mites, foliar disease and aphids.