Potato leafhoppers have arrived in parts of Michigan and rose chafers are emerging in southern Michigan.

Warm weather has driven rapid bine growth over the past two weeks. Growers are irrigating often as weather has been dry for much of Michigan. Nitrogen applications are near peak levels for the growing season at this time. All stringing and training should be completed.

Potato leafhoppers have arrived and are being reported in the major hop producing regions of Michigan. Potato leafhoppers overwinter in the Gulf States and move north on winds and storms. Like many plants, hops are sensitive to the saliva of potato leafhoppers, which is injected by the insect while feeding. Damage to leaf tissue can cause reduced photosynthesis, which can impact production, quality and cause death in first-year plants. Most injury occurs on rapidly expanding leaf tissue with potato leafhoppers feeding near the edges of the leaves using piercing-sucking mouthparts. Symptoms of feeding appear as whitish dots arranged in triangular shapes near the edges. Heavily damaged leaves are cupped with necrotic and chlorotic edges and eventually fall from the tree. Severely infested shoots produce small, bunched leaves with reduced photosynthetic capacity. Symptoms of feeding damage are commonly referred to as “hopper burn.” 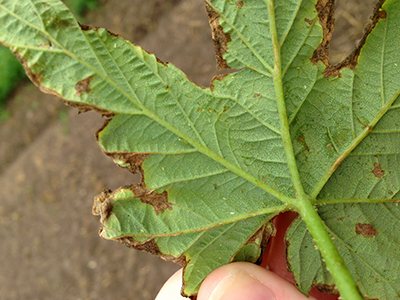 Adult leafhoppers are pale to bright green and about 0.125 inch long. Adults are easily noticeable, jumping, flying or running when agitated. The nymphs (immature leafhoppers) are smaller, pale green and have no wings, but are very similar in form to the adults. Potato leafhoppers can’t survive Michigan’s winter, and survives in the Gulf States until adults migrate north in the spring on weather systems. Economic thresholds have yet to be developed for potato leafhoppers in hop.

Scouting should be performed weekly as soon as leaf tissue is present to ensure early detection and prevent injury. More frequent spot checks should be done following rain storms, which carry the first populations north. Pest management specialists recommend scouting the underside of three leaves per hop plant per cultivar weekly. The easiest way to observe potato leafhoppers is by flipping the shoots or leaves over and looking for adults and nymphs on the underside of leaves. Pay special attention to succulent new leaves on the terminals of branches. 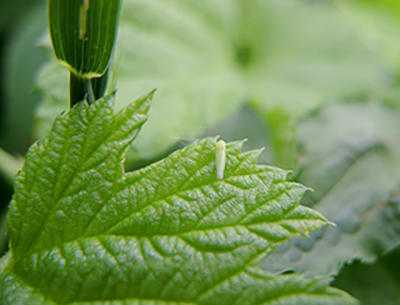 The most common classes of insecticides recommended for potato leafhopper control include the pyrethroids, neonicotinoids and organophosphates. Organophosphates are broad spectrum and can disrupt natural enemies, so only use when necessary to rotate insecticidal mode of action or to target another pest at the same time. Pyrethroids are also effective at controlling potato leafhoppers and remain relatively inexpensive. However, pyrethroids have been shown to cause increases in mite populations in other crops and should be used judiciously, particularly early in the season when mite populations have time to build over the season. Neonicotinoids are longer lasting and narrow spectrum, making them a solid choice for management. For more information on chemical management, refer to “Pesticides registered for use on hops in Michigan,” which can be found MSU Extension’s Hops website.

Rose chafers are being reported in southern Michigan. Rose chafers are considered a generalist pest and affect many crops, particularly those found on or near sandy soils or grassy areas conducive to grub development. The adult beetles feed heavily on foliage and blossom parts of numerous horticultural crops in Michigan and can cause significant damage to hop plants, particularly young plants with limited leaf area. Rose chafers skeletonize leaf tissue, giving them a fine, lace-like appearance. Rose chafers cause simple mechanical damage, so growers should consider that established plants can sustain a significant amount of leaf feeding from rose chafers with no negative implications to the plant or crop. Young plants with limited leaf area may require more aggressive management. Chafer activity has typically subsided by the time burrs are present, so flower damage that could have yield implications is not an issue. 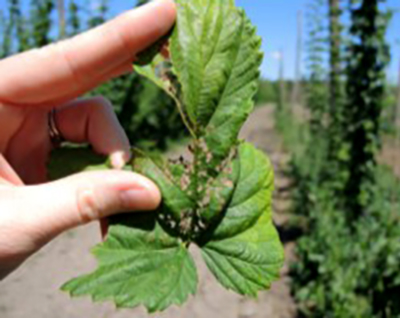 Rose chafers are a light-tan beetle with a darker brown head and long legs, and are about 12 millimeters long. There is one generation per year. Adults emerge from the ground during late May or early June and live for three to four weeks. Females lay groups of eggs just below the surface in grassy areas of sandy, well-drained soils. The larvae (grubs) spend winter underground, move up in the soil to feed on grass roots and then pupate in spring. A few weeks later, they emerge from the soil and disperse by flight. Male beetles are attracted to females and congregate on plants to mate and feed. Populations may be larger around large areas of turf or grasses. 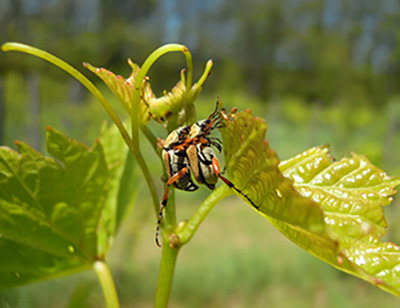 Rose chafers are often found in mating pairs and fly during daylight hours. Visual observation while walking diagonally through the hopyard is the best method for locating them. Because of their aggregating behavior, they tend to be found in larger groups and are typically relatively easy to spot. There are no established treatment thresholds or data on how much damage a healthy hop plant can sustain, but growers should consider that well-established and vigorous plants will likely not require complete control. First-year plantings with limited leaf area may need to be managed more aggressively.

Managing rose chafers can be a frustrating endeavor as they can reinfest from surrounding areas, which is often misinterpreted as an insecticide failure. Organophosphate, pyrethroid and neonicotinoid insecticides all have good activity against rose chafers and can provide some control. Insecticides have the potential to disrupt beneficial insect and mite populations, so they should only be used when absolutely needed. Organic options, including Surround WP, are also available; good coverage is key and it should not be applied after burrs are present. For a complete list of pesticides currently registered, refer to “Pesticides Registered for Hops in Michigan,” available at MSU Extension's Hops website. Be sure to note each product’s “beneficial insect toxicity” when choosing a pesticide to limit unintended negative impacts on beneficial insects.

Don’t forget, all insects aren’t bad! There has already been a substantial amount of lady bug activity this spring. To learn more about these important pest management allies, visit MSU’s Biocontrol website.