Construction is nearing completion for the new Morrill Plaza, located on the campus of Michigan State University at the site of old Morrill Hall in East Lansing, recently demolished between May and September 2013.

Construction is nearing completion for the new Morrill Plaza, located on the campus of Michigan State University (MSU) at the site of old Morrill Hall in East Lansing, recently demolished between May and September 2013. Students from the MSU School of Planning, Design and Construction’s (SPDC) Landscape Architecture (LA) Program are witnessing a vision they helped create here, becoming reality.

In 2011, the LA Program held its eighth Biennial Graphic Workshop and Big Ten Design Charrette. The Morrill Hall Workshop/Charrette was a fun and creative design event that allowed SPDC students from MSU, and other Big Ten Universities, to work with acclaimed national designers to develop ideas for the vision of the Morrill Hall site. It also provided an opportunity for the public to give comments and ideas as the design unfolded and allowed them to learn how community planning works. 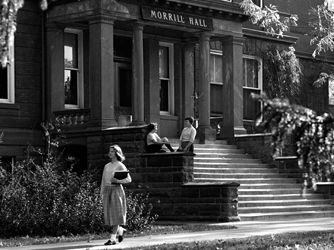 “Students experienced two days of intense graphic instruction, and in one 24-hour period created a range of design visions toward honoring the first Women’s Building on campus. At the same time, they were asked to honor the Land Grant traditions of MSU by acknowledging Morrill Hall and the Morrill Act that it was named after, in the northward expansion of the sacred space, the ‘Oak Opening’ of campus,” said Paul Nieratko, Senior Specialist in the LA Program and Coordinator of the event. “Every design team had some realistic and implementable ideas and I’m very happy with the design results from all.”

The guiding student concept sited the plaza in the exact location the former main hallway of Morrill Hall. The final design, refined by Deb Kinney, Landscape Architect in MSU Infrastructure Planning and Facilities, includes a special paving pattern modeled after the window mullions of Morrill Hall, along with jointing in the pavement to show where the front porch stairs once stood.

Such materials as the Lake Superior Red Sandstone and red bricks that helped this unique building stand out on campus were carefully preserved during Morrill Hall’s de-construction process and then re-used in constructing the plaza features. Some of the salvaged bricks are on sale through the MSU Surplus Store, and some of the sandstone will be used in the renovation efforts underway at Chittenden Hall.

Kinney stated that four historic markers will be added to the two masonry walls constructed from salvaged brick and sandstone to describe the history of the building.

“These plaques will honor the Women’s Building,” Kinney said. “Morrill Hall was the first building built expressly for women as their population grew on campus.”

She added that the other two plaques will feature information on the Land Grant Mission and the Morrill Act.

Other interpretive signage may be added to help visitors appreciate the materials and the symbolism utilized to tell the story of the former site use.

“It will hopefully make people think about the importance of honoring MSU’s past,” Kinney said.

Michigan State University President Lou Anna K. Simon is planning to host the dedication ceremony on MSU’s Founders’ Day on Tuesday, February 11, 2014. Look for more information regarding the ceremony from MSU in 2014.

Questions about the Morrill Hall Workshop/Charrette should be sent to Paul Nieratko at nieratko@msu.edu or call 517.353.7883. Learn more at Big Ten Graphic Workshop and Design Charrette.